Consumers of etailing websites will now have to wait for at least 4-7 days for their deliveries to arrive as compared to 1-2 days before, and pay more, after the new e-commerce FDI policy took effect from Friday.

The impact is especially felt on Amazon, which has removed a significant amount of products from its platform across categories like mobile, electronics, grocery and fashion, among others. Sellers like Cloudtail and Appario (where

is a JV partner) After Amazon’s December quarter earnings on Friday, the company CFO Brian Olsavsky said the new policy will hit pricing and selection for consumers as well as sellers in India.

Globally, Amazon’s international business reported losses of $ 642 million compared to the year-ago period of $ 919 million – about 30% down by December quarter. Amazon’s aggressive spends for the Indian market has been cited as one of the reasons for the thin margins in the international business. For the same period, Amazon’s global sales grew by almost $ 21 billion to $ 18 billion a year ago.

In a conference call, Olsavsky said, “Our main concern is to try and minimise the impact to our customers and sellers in India. We have built our business around price selection and convenience. We do not think the changes help in those dimensions for both customers and sellers in India. We have been committed to complying with all laws and regulations but we are evaluating the situation. ” 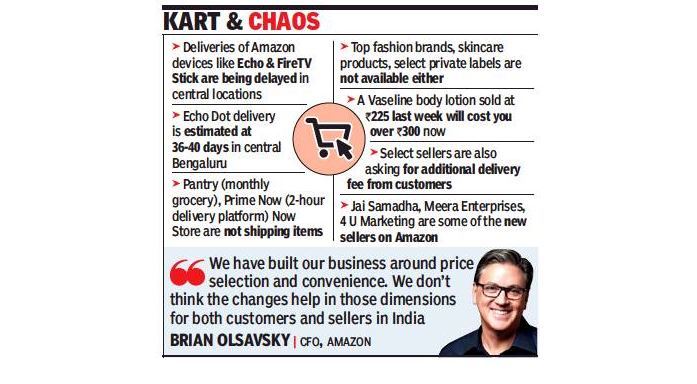 Flipkart, too, issued a statement, saying it was disappointed with the government’s move to stick to the original deadline.

did not see a immediate impact as it does not own shares in any of its large sellers, but is likely to see an effect in the coming weeks as the current inventory runs out and the e-tailer restructures with brands of brands.

The new regime is affecting products of third-party brands as well as Amazon’s in-house labels. Industry estimates suggest Cloudtail and Appario moved at least 50% of shipments for Amazon, which are now largely unavailable to be sold. Only a part of that is currently being routed to small sellers and Amazon is offering delivery estimates of 5-7 days, or more in some cases.

In the last 24 hours, the platform has seen new sellers emerging that are some of Cloudtail’s products on Amazon. Jai Samadha is one of the newly launched seller entities. Pantry, the monthly grocery segment for Amazon, also has almost stopped selling FMCG and other daily movables. This reflects on Prime Now (express delivery platform) too, where it has removed its own store – Now Store – run by Cloudtail The large sellers are part of what is called the Fulfilled by Amazon (FBA) program, which ensures adequate inventory and faster shipping, once an order is placed on the platform.

Over the last one year, sellers like Green Mobiles, Amazing Buy, Olympia Industries, UBSPD and uRead-Shop have increased their exposure on Amazon India, but Cloudtail and Appario remain critical to the local arm of the Seattle-based e-tailing giant. According to Marketplace Pulse, which collects data on such platforms internationally

As Amazon started cleaning its platform after realization the government is not expanding the deadline, sellers like 4 U Marketing was selling Amazon devices. “All sellers make their own independent decisions of what and when, and we can not comment on that,” an Amazon India spokesperson said. For Amazon, the new rules will also affect its critical base of Prime Subscribers who were announcing a wide selection with fast deliveries. A Barclays report last year said Amazon has about 7 million paid Prime subscribers here. Prime users tend to buy more often than non-Prime users

Another human case of mosquito-borne EEE confirmed in Michigan – WDIV...

Jailed PKK leader Ocalan ‘ready for a solution’ with Turkey

‘Targeted killings’ and wave of arrests in Syria’s Deraa