Salwa, a three-year-old Syrian girl, has only ever known war. But now, when she hears the sound of falling bombs, she laughs.

In a video that has been widely shared on social media, the toddler stands on a sofa, leaning against her seated father, Abdullah al-Mohamed, and they play a bittersweet game they seem to have played many times before.

As a rumbling sound grows louder, al-Mohamed asks Salwa: “Is that a plane? Or is it a shell?”

“A shell!” Salwa responds, proud to have guessed right. “It’ll fall now, and we can laugh.”

As the blast sounds, the toddler jumps a little then starts laughing loudly as her more subdued father encourages her, laughing along and saying: “That’s funny, right? A shell?” His smile falters at the end of the video, when Salwa looks away.

The video was filmed in Sarmada, a small town near Syria’s border with Turkey where the family has sought refuge amid a renewed offensive by Syrian government forces and their allies on rebel-held northwestern Syria.

The family were forced to flee their home in Saraqeb, a strategic town in Idlib province that fell to government forces earlier this month, when the air raids became too “intense” to handle, al-Mohamed told Al Jazeera.

The 32-year-old said he devised this private game to help Salwa, his only child, overcome her fright as the attacks on Saraqeb intensified in December.

“Children in our neighbourhood used to play with bang snaps. One time during Eid, they threw them around to celebrate and Salwa was frightened by the noise,” he said, referring to the religious Muslim holiday.

“I took her out to the balcony to show her that it was just a toy, a game kids play to celebrate Eid and whatnot,” al-Mohamed added.

“I tried to use the same pretext to convince her that this was just a game, that she shouldn’t be scared,” al-Abdullah said. “I needed to remove the fear from her heart,” he said. “I wanted her to associate these loud, frightening sounds to something that is light and amusing.” 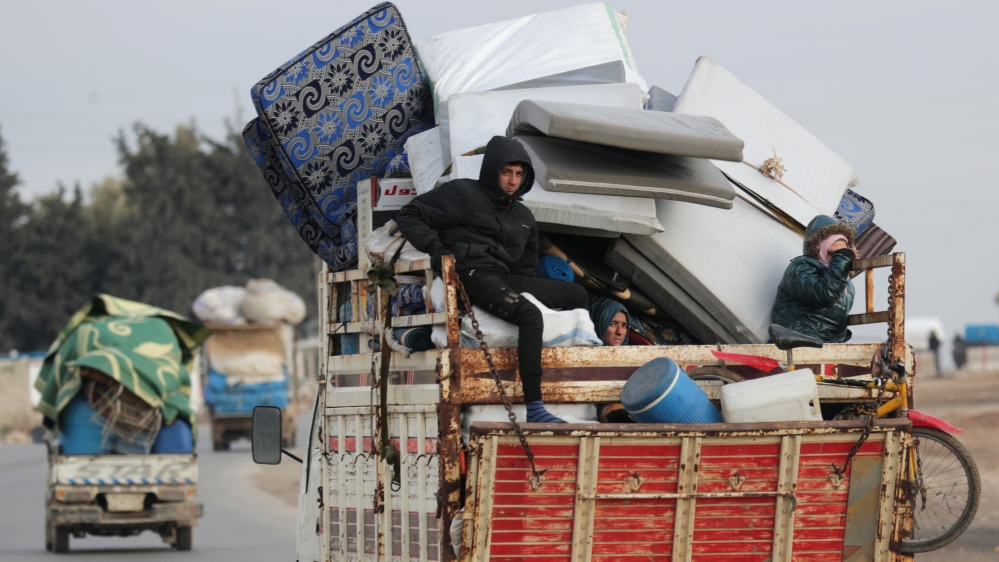 According to the UN, some 900,000 people have been displaced in the area since the December offensive [Khalil Ashawi/Reuters]

More than three million people live in Idlib province, many displaced from other parts of the country recaptured by government forces. According to the UN, some 900,000 people have been displaced in the area since the December offensive.

The renewed military push has strained the fragile cooperation between Turkey, Russia and Iran, the main international players in Syria’s war, who had designated Idlib as a de-escalation zone in a 2018 deal that slowed al-Assad’s push to retake the territory.

Under the deal, Turkey, which supports a number of rebel groups, and Russia, which backs al-Assad, agreed to create a demilitarised zone in Idlib. However, the parties have accused each other of not sticking to the terms of the agreement and, last April, al-Assad relaunched his drive to take control of the last remaining rebel-held area.

A number of ceasefires were negotiated and failed to hold last summer, with the government offensive restarting in December. The assault has been characterised by fighter jets launching initial attacks followed by shelling and the arrival of ground troops, as civilians flee en masse from towns, including Maaret al-Numaan and Saraqeb, towards the closed Turkish border.

“During our last days in Saraqeb, the shelling was so intense … When it started, it could take up to a month to wind down,” al-Mohamed recalled.

‘My game will no longer be enough’

Al-Mohamed is not hopeful for the future, unable to find work as the family struggles to cope with everyday life near the sealed border with Turkey, which hosts some 3.6 million Syrian refugees and has said it is unable to absorb more.

As a father, he worries constantly about the environment Salwa might grow up in.

“She’s doing fine, for now; she’s a child who plays, laughs, and jokes,” he said. “But my fear is that as she grows up, the shelling continues. And when it does, my game will no longer be enough to shield her from deeper psychological trauma.”

“I don’t have any expectations for the future; it’s unknown to us here,” al-Mohamed said hopelessly.

“I want the world to know: We’re not terrorists as the regime paints us out to be,” he said, “We’re human, we’re worthy souls who have the right to live like any other human being in the world.”

On Monday, in rare public remarks, al-Assad vowed to continue pressing on with the offensive in Idlib province as well as the outskirts of neighbouring Aleppo.

Syrian state television said on Sunday that the Russian-backed forces had “liberated all the villages and small towns west of Aleppo city”, in what marked a significant advance for the government.

Half of England is owned by less than 1% of the...