MUMBAI: MS Dhoni has decided to walk away from the game – for the time being The former India skipper has decided to take a two-month break from the game to serve his army regiment, allowing the selectors as a breather as they meet here on Sunday for the squads for the tour of West Indies.

TOI had reported on 17 July that Dhoni would take a break to train with the Territorial Army. He holds the rank of honorary lieutenant colonel

The tour which begins on August 3 includes three T20Is, an equal number of ODIs, and two Tests. The focus has now shifted from the ageing great, who has polarized opinions over his future. This is the first meeting of the selectors post the 2019 World Cup, in which India reached the semifinals before losing to New Zealand. 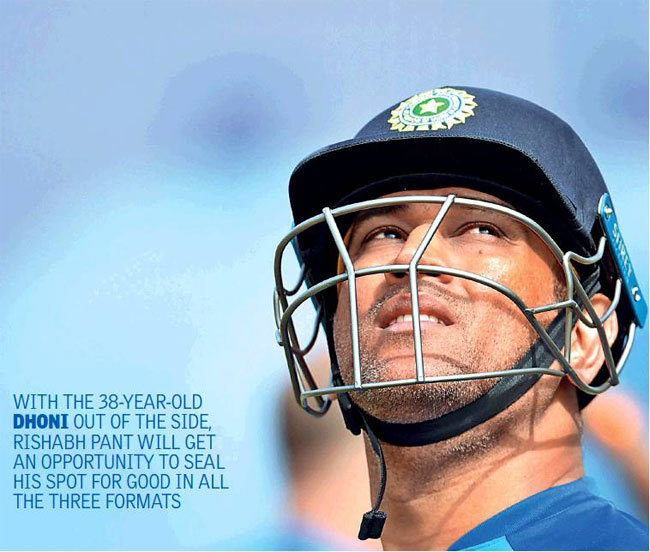 With the 38-year-old Dhoni out of the side,Rishabh Pantwill get a chance to seal his spot in all three formats. Along with Dhoni, another veteran ‘keeper-bat who has played his last ODI in the World Cup isDinesh Karthik. The 34-year-old had scored scores of 8 and 6 in the two games that he played in the World Cup, as India preferred to play Pant – who was not even in the original squad – ahead of him.

While Pant, who smashed an unbeaten 159 in the fourth and final Test against Australia in Sydney in January this year, will be the first-choice ‘keeper in tests, it will be interesting to see who makes the cut for the second wicketkeeper’s slot in The longer version of the game In the race areWriddhiman Saha, who is trying to stage a comeback after an injury forced him out of the team after the first Test against South Africa at Cape Town in January 2018, the experienced Parthiv Patel and KS Bharat.

West Indies, South Africa, Australia, New Zealand, Sri Lanka and England Lions, have scored 686 runs (three centuries and two half-centuries), with 11 unofficial Test defeats. 41 catches and impressed six stumpings He scored three centuries – against Australia A (106 at Alur), England Lions (142 at Wayanad) and Sri Lanka A (117 at Hubli). Overall, Bharat has an impressive record of 65 first class matches, 3798 runs with eight centuries, 20 fifties, besides having taken 223 catches and 27 stumpings. What works in the 25-year-old’s favour is that both Parthiv and Saha are 34

CaptureVirat Kohliand ace pacerJasprit Bumraharetouringthe limited overs leg from the rest of theseason, which starts on August 3 at the first T20 International Lauderhill. guns, though, could return to the team for the two-Test series against the hosts, which will begin with the first Test in Antigua from August 22.

It remains to be seen ifShikhar Dhawan, who has broken his finger during the World Cup, has recovered for the tour. The ace opener was recently put up a video in which he picked up a bat for the first time since his injury while taking on a #BottleCap Challenge thrown at him by his old India teammateYuvraj Singh.

If Dhawan returns to the side, KL Rahul is set to return to the No. 4 slot Otherwise, Rahul, Rohit and Mayank Agarwal are set to be the three openers for India. Similarly, all-rounder Vijay Shankar, who was ruled out of the World Cup midway due to a toe injury, also has his fitness for assessment of the possibility, especially as the selectors will all-rounderHardik Pandyaa rest post a hectic World Cup, considering his injury-prone back

Time to find solutions for No.4

Meanwhile, the likes of Manish Pandey,Shreyas Iyerand Shubman Gill are all set to make a comeback in India’s limited overs team. The idea behind all these batsmen is obviously solidify the number. 4 batting position, which was a constant source of worry for the team during the World Cup.

Pandey scored a hundred (100) in the third one-dayer at North Sound to help India beat West Indies A by 148 runs. The Karnataka batsman has largely been at that position.

In the pace department, Delhi’s Navdeep Saini is set to be picked in the Indian team for the first time, and is set to make his debut too. Saini, who played for Virat’s RCB in the IPL, has taken 79 wickets in two games @ 13.16 for India A in the West Indies. Those who saw him bowl in the India net during the World Cup felt that the youngster was impressive to the point of being just to be the Indian team during the tournament itself.

This will also be the first selection meeting in the BCCI’s long history, which will be convened by the chief selector, and not the BCCI secretary. An interesting Sunday, which will tell us much about Indian cricket’s future, awaits us

Are these Punjab policemen law enforcers of the longest reach? –...

Don’t sleep on defensive lineman Rashan Gary to the Dolphins at...

State’s 17th case of measles reported, anyone who visited this N.J....