Welcome to IGN’s Daily Deals, your source for the best deals on the stuff you actually want to buy. If you buy something through this post, IGN may get a share of the sale. For more, read our Terms of Use.

We bring you the best deals we’ve found today on video games, hardware, electronics, and a bunch of random stuff too.Check them out here or like us on Facebook and follow us on Twitter to get the latest deals. 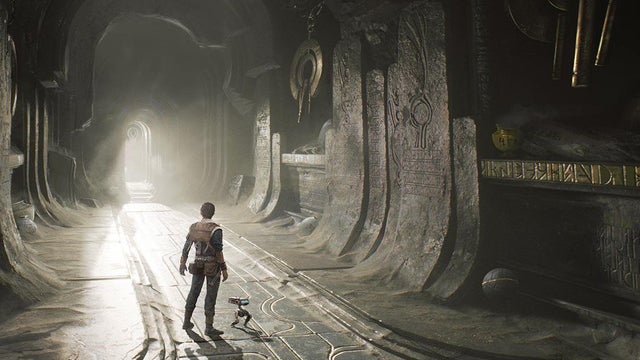 We got our first look at Star Wars Jedi: Fallen Order with a cool story trailer released at Star Wars Celebration in Chicago. We also got a release date of November 15, 2019! Multiple stores already have preorders available. The Deluxe Edition with a preorder bonus including cosmetic items for your lightsaber and droid companion.

This deal is limited to first time subscribers (although there are reports that it works with anyone who doesn’t have an active subscription). Xbox Game Pass gives you unlimited access to a huge library of Xbox games. You’re free to play them when, where, and how often you want as long as your subscription is still active. Current popular titles include State of Decay 2, Sea of Thieves, Gears of War 4, Warhammer: Vermintide 2, Rocket League, Fallout 4, and much much more.

Take a nice 60% off the fourth installment in the DC Lego series. Play as a unique and custom character as you interact with LEGO versions of Joker, Harley Quinn, and more.

Somehow the Persona 5 hype continues to march forward. Amazon has a Panther figma on sale for 30%. Comes in at 5.7 inches and features turning joints and optional parts.

Right now, ESPN+ is running a deal on its service to net you a full year subscription and access to stream this weekend’s UFC 236 Pay Per View event for $79.99. That’s 12 uninterrupted months of full ESPN+ access, and you get to watch UFC 236: Holloway vs. Poirier 2 tomorrow, on April 13.

Moving forward, UFC PPV events are distributed exclusively through ESPN+, and you’ll need a subscription to purchase any events. In addition to exclusive live access to 20 Fight Nights, ESPN+ offers you over 100 other UFC fights. In addition to UFC, you’ll also get access to live MLB, NHL, and MLS, college football and basketball, tennis, and golf games.

Nintendo Switch with Mario Odyssey or Breath of the Wild or Other Game, Exclusive Mario Pin, and Card Reader for $329.99

The best Nintendo Switch deal of 2019 is back, plus the selection of games has changed to include the best non-Mario titles as well as the Mario ones. Choose between a neon or gray Switch along with one of five games (Super Mario Odyssey, Mario Kart 8 Deluxe, Super Mario Party, The Legend of Zelda: Breath of the Wild, or Splatoon 2), an exclusive Mario Pin, and a card reader all for only $329.99. This deal won’t last long.

There is and always will be a market for new amiibo. These new amiibo are finally available and Amazon currently has all of them in stock. In fact, the most popular amiibo, Young Link, is actually discounted.

The Apple Watch Series 3 is back at the lowest price it has ever been. If you don’t need the ECG or other medical capabilities of the Series 4, you’ll be saving $200 by going just one generation back. The Series 3 features an aluminum case that’s waterproof up to 50 meters, built-in heart rate monitor, GPS, and its small, sleek, and looks almost identical to the Series 4.

This is Dell’s highest end gaming PC outside of Alienware. Not only are you getting a GTX 1080 video card capable of handling any game out there (including VR), you’re also getting an 8th gen Intel Core i7 6-core processor and 16GB of RAM. If you want an even greater improvement in performance, I would recommend getting an SSD to pair with the included 1TB hard drive.

1-Year Playstation Plus Membership for $42.99

First things first, you must create a (free) StackSocial account in order to use this coupon code. PS Plus membership discounts only happen a few times a year so grab this deal when you can. This membership gives lets you play games online, plus you’ll get the best discounts at the Playstation Store, as well as new free games every month. This month, for example, gives you two great PS4 games: Conan Exile and The Surge.

This V-MODA has consistently been well reviewed by critics and users alike. This bluetooth headphone can also be used wired in case you run out of battery or want absolutely zero latency. it has a built-in microphone, dual-diaphragm 50mm drivers for big punchy sound, and quality construction like a steel band, vegan leather plush earcups, and more. These headphones sold for $300 up until last October and hovered around $160 during Black Friday, so $99.99 is a pretty respectable price drop.

The PS4 Platinum headset boats several upgrades to the PS4 Gold. The Platinum model supports 7.1ch surround sound with 3D audio for better sound staging, larger 50mm drivers for punchier bass and less distortion at higher volumes, and dual mics for more effective noise cancellation. If you’re a hardcore PS4 gamer and you use your headphones quite often, then you owe it to yourself to get this headset at the lowest price it’s ever been.

If you don’t mind the fiery red color (I actually think it’s awesome), then you’d be scoring a great deal on these G433 cans. They normally sell for $90 and work for any gaming console or PC. We reviewed it and really, really like it.

The movie scored a 92% aggregate rating on Rotten Tomatoes, far far far far better than any Michael Bay Transformers movie. It’s normally a $4.99 rental on Amazon but Amazon Prime members can watch it for only $2.99.

Dell has kicked off this week with a selection of 13 Vizio, Sony, Samsung, and LG TVs. They’ve discounted several well-rated current model TVs the way they always do – with a 90-day gift card that can be used on practically anything at Dell.com, including consoles, monitors, VR headsets, games, video cards, computers, and more.

Now that the new 2019 iPads have been announced, the 2018 iPads are seeing a 25% price drop. This is cheaper than what we saw on Black Friday. The 2018 Apple iPad boasts a 9.7″ Retina display, A10 Fusion 64-bit processor, dual cameras, 10-hour battery life, and Apple Pen support.

This is one of very few themed Switch consoles (if you don’t count the ones that are “themed” with different colored Joy-Cons). It’s been sold out for most of the time since it was released late last year, but inventory has been replenished today. The bundle includes the Switch with yellow and gold Joy-Cons as well as a custom designed back and dock, a copy of Pokemon: Let’s Go! and the Poke Ball Plus. There’s no upcharge compared to buying this bundle separately, and you won’t get this design any other way.

The price of this bundle has dropped an additional $20 today, making it a great value compared to buying each item individually. This bundle includes the Switch console, Starlink starter pack (including the game), and your choice of Starlink accessory. The Switch version includes the Starfox character as well as the iconic Arwing starfighter.

Preorder the Sega Genesis Mini with 40 Pre-Loaded Games for $79.99

The Sega Genesis Mini is now up for preorder with a slated release date of September 19. 40 games will be pre-loaded onto the console. The 10 we know of at the moment are:

All reports indicate that Sega is going to do this release right. According to our own Seth Macy, “if you have emulation worries, Sega has M2 working on the emulation for its mini console. If you’re unfamiliar with M2, it handled the excellent Sega Ages Collections and also the delightful Sega 3D Classic collections for Nintendo 3DS. It would be hard to find a developer with a better pedigree to handle the software for the first-party Sega Genesis Mini.“

Eric Song is IGN’s deal curator and spends 25% of his pay on stuff he posts.

Intel has its laptop work cut out this year – The Verge

Is the Houseparty app really hacking your phone? – New Statesman

Teachers’ one-day strike could be first of many: Union

Michael van Gerwen ‘angry’ after being showered with beer by fan...

Jane Fonda’s plan to get through to Trump on climate crisis...

Trump says in State of the Union speech that investigations into...

Democrats need to unite behind their nominee, whoever he may be

Wirecutter’s best deals: Save $50 on a Schlage Connect smart lock...