Protesters have clashed with Ecuadoran forces as they marched towards the capital, Quito, to demonstrate against soaring fuel prices, with the government announcing a seizure of oil facilities by unidentified groups had slashed production by 12 percent.

Riot police and the military on Monday used tear gas to try to disperse marchers in the town of Machachi on the outskirts of Quito after they blocked roads with burning tires and barricades ahead of a protest set for Wednesday.

“More than 20,000 indigenous people will be arriving in Quito,” said Jaime Vargas, leader of the umbrella indigenous organisation, CONAIE.

In 2000, CONAIE was key to driving then-president Jamil Mahuad from office during another economic crisis.

Other protesters attempted to force their way into the national legislative assembly in the capital, and committed “acts of vandalism in the vicinity,” the body said in a statement. 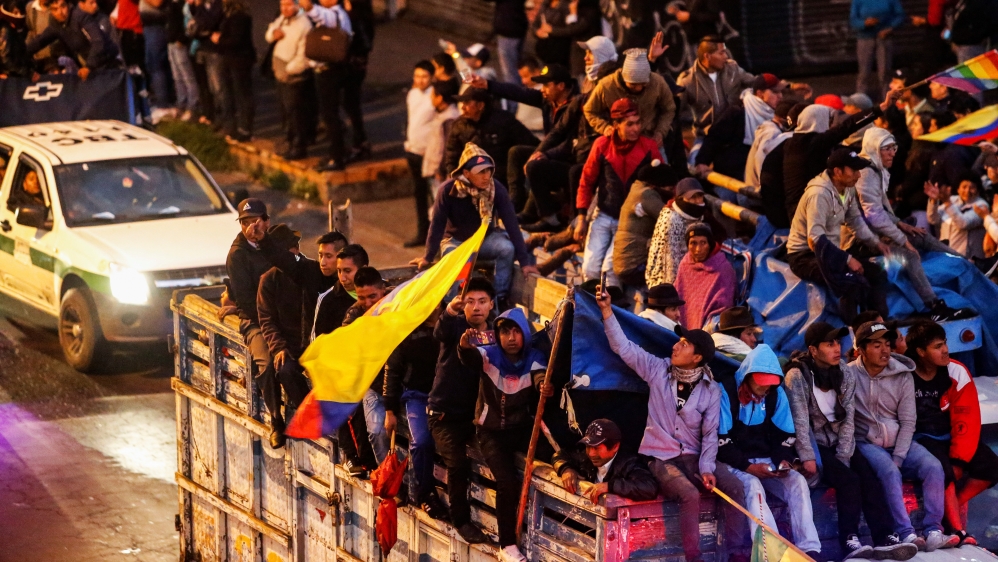 The clashes came as Ecuador‘s Ministry of Energy announced that activities in three oil fields in the Amazon region – one operated by private firm Petrobell and the others by state company Petroamazonas – had been suspended “due to the seizure of the facilities by groups of people outside the operation”.

The seizures affected 12 percent of the country’s oil production, or 63,250 barrels of crude a day, the ministry said in a statement that did not identify the groups responsible.

In a radio and television address, President Lenin Moreno accused his predecessor and ex-ally Rafael Correa and Venezuelan President Nicolas Maduro of an “attempted coup d’etat” and of “using some indigenous groups, taking advantage of their mobilisation to plunder and destroy.”

He added that government business had temporarily moved to the port city of Guayaquil.

Protesters from southern Andean provinces, some armed with sticks and whips, are travelling to the capital in pick-up trucks and on foot, according to CONAIE, while other indigenous groups are set to arrive from the north.

The protests – the largest in a decade in Ecuador – are being led by transport unions but have been joined by students and others.

The country has been rocked by days of demonstrations after increases of up to 120 percent in fuel prices came into force on October 3.

They have, so far, left one civilian dead and 77 injured, the majority of them security forces, the government said. A total of 477 people have been detained.

President Moreno scrapped fuel subsidies as part of an agreement with the International Monetary Fund (IMF) for a loan despite Ecuador’s high public debt.

Moreno had called for dialogue with the indigenous groups on Sunday.

Nelson Erazo, the leader of the Popular Front of workers and students, has said: “The people’s actions will not stop here if the government does not change its policy.”

The subsidies were costing the government $1.3bn a year.

Moreno, who blames the deterioration in the country’s finances on Correa, declared a state of emergency on Thursday.

It allows the government to restrict movement, to use the armed forces to maintain order and to censor the press.

“This is a very difficult situation, that could lead us into less stable situations, to governments that fall,” said Simon Pachano, a political scientist at Quito’s FLACSO university.

CONAIE warned that security forces entering indigenous areas would be captured and held.

‘One comfort woman for every 70 soldiers’, Japanese records show

Got Bitcoin? Gold Bug Peter Schiff Loses All of His BTC,...

The first trailer for ‘The Mandalorian’ shows ‘Star Wars’ fans a...

The Pittsburgh Steelers face a no-win situation vs. the Oakland Raiders...