Gargi Kalita wrote, “Because of such women, actual victims do not get justice. It is high time that the laws were made to punish the people who misuse the law.” Amitava Bhattacharyya asked, “Who will compensate for all the harassment the guy went through? This type of lopsided laws need to be revoked immediately.” Another citizen, Puneet Malhotra, wrote “If the rapes creates fear among society, then false charges too create fear in society”.

ActressPooja Bedisaid onTwitter, “Mumbai policein such a hurry to arrest Karan Oberoi, strongly opposed her bail and confiscated her phone.” Her phone not taken. “High court judge asks why no arrest for woman and finally her arrest and rush her for bail without letting Karan’s lawyer know? ” One RN Mohanty has advised Oberoi to file a case against him

A section of citizens felt the “false complainant”. Documentary filmmaker Deepika Bharadwaj told a TV channel, “Whenever cases like this come to light, women activists say things like it is an isolated incident and we should not talk about it because then women will come forward (abuse of complaints) . ” Sagarika Mishra commented, “She (the woman) should be treated equally. Let her face the same public humiliation.” Some others too posted on social media that the woman was named as orchestrating an attack on herself. Vishal Kulkarni said, “Now the lady who has been accused Karan is a criminal. Reveal her identity.” 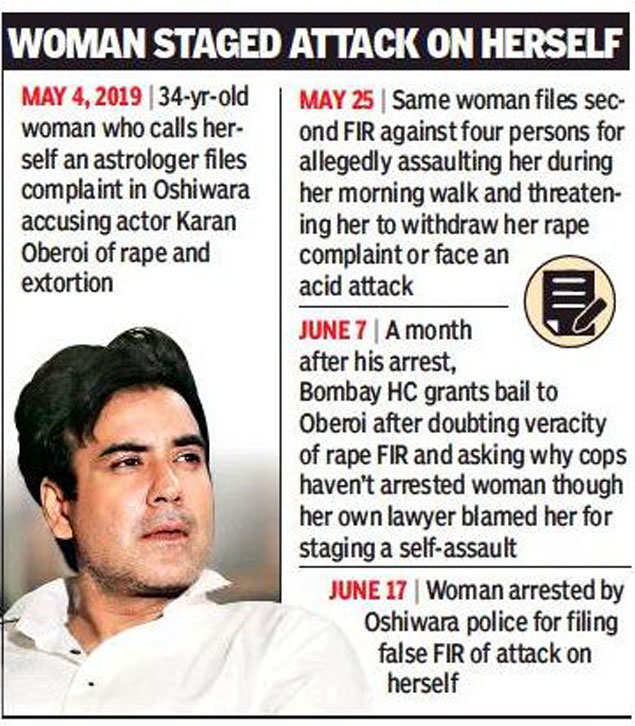 However, Section 228-A of the IPC relating to disclosure of victims of certain offenses prohibits the name of a rapper victim. If the name is revealed, the sentence is a maximum of two years’ imprisonment and fine. Section 228-A (2) states that the name of the women in such cases could be printed only by a written order of a police officer in good faith for investigation or with written authorization of the victim; If the victim is dead or not, then the authorization of next of kin is necessary; Such authorization can only be given to the identified social welfare institution.

Not the time to find faults but to take action: Health ministry official on Nizamuddin congregation

Covid-19 hotspots in country have increased due to 'lack of people's support': Health ministry

In the wake of latest massacres, Walmart is pressured to stop...

Is Ozil’s Arsenal place in doubt and do Chelsea have a...

Watch Spotting: A Cartier Panthère In The Original ‘Top Gun’ –...

World's richest man wants to 'leave' this planet, here's why