The self-described neo-Nazi who killed 32-year-old Heather Heyer when he rammed his car into a crowd of counterprotesters after a 2017 white supremacist rally was sentenced to life in prison by a federal judge in Charlottesville, Virginia, on Friday.

James Alex Fields Jr, 22, had pleaded guilty in March to federal hate crimes connected to the attack at the August 12, 2017, Unite the Right rally. In exchange, prosecutors dropped their request for the death penalty. His attorneys asked for a sentence less than life. He will be sentenced next month on separate state charges.

Before the judge handed down his sentence, Fields, accompanied by one of his lawyers, walked to a podium in the courtroom and spoke.

“I apologise for the hurt and loss I’ve caused,” he said, later adding, “every day I think about how things could have gone differently and how I regret my actions. I’m sorry.”

Fields’s comment came after more than a dozen survivors of and witnesses to the attack delivered emotional testimony about the physical and psychological wounds they had received as a result of the events that day.

Heyer’s parents described the grief of losing their daughter.

“It was an incident I will never fully recover from,” said Heyer’s father, Mark Heyer. 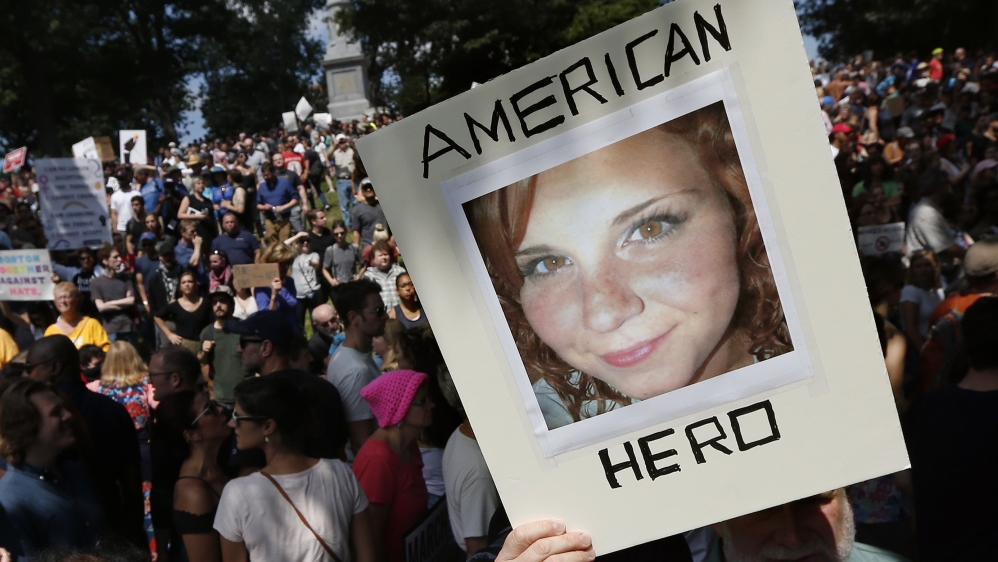 Her mother, Susan Bro, described herself as “deeply wounded” and recounted crying uncontrollably at times.

In the months aftermath of the attack, Fields remained unrepentant, prosecutors said, noting that in a December 7, 2017, phone call from jail with his mother, he blasted Bro for her activism after the attack.

“She is a communist. An anti-white liberal,” Fields said, according to court papers filed by prosecutors. He rejected his mother’s plea to consider that the woman had “lost her daughter”, replying, “She’s the enemy.”

Fields’s lawyers had urged the judge to consider a lesser sentence for the attack that also injured 19 people at the Unite the Right rally.

Unite the Right, which was organised to oppose Charlottesville’s decision to remove a Confederate statue, was the largest white nationalist rally in the United States in recent years.

Fields drove to Virginia from his home in Maumee, Ohio, to support the white nationalists.

During the rally, the then-21-year-old had been photographed marching with Vanguard America, a neo-Nazi group, during the rally. Throughout the day, rally participants clashed with community members, anti-racists and anti-fascists across the city.

The rally brought out thousands of supporters of the alt-right, a loosely-knit coalition of white supremacists, white nationalists and neo-Nazis.

After the rally, as a large group of counterprotesters marched through Charlottesville singing and laughing, Fields stopped his car, backed up, then sped into the crowd, according to testimony from witnesses and video surveillance shown to jurors during the trial.

Following the 2017 Unite the Right, President Donald Trump inflamed tensions even further when he said “both sides” were to blame, a comment some saw as a refusal to condemn racism.

White nationalist, neo-Nazi and far-right groups that took to the streets in Charlottesville saw permits for a spate of subsequent public events pulled or denied while hosting services, social media outlets and tech companies cracked down on far-right individuals and groups.

Dermot O’Leary QUITS as NTAs host after 10 years – after...

Egypt is a speeding train about to crash