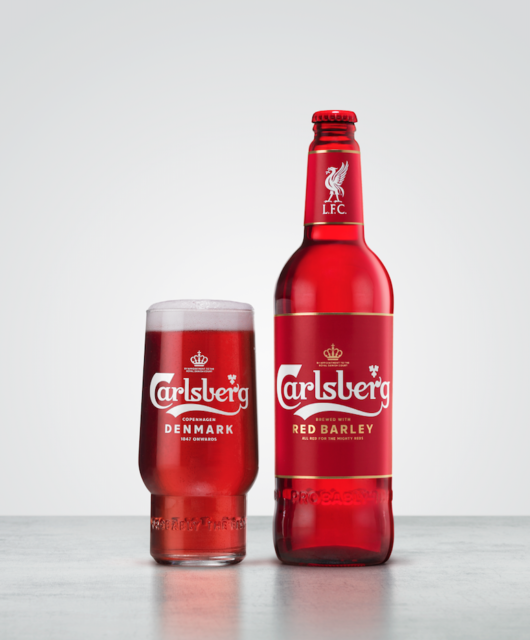 The limited-edition beer – named Red Barley – will be launched at Liverpool FC’s home stadium Anfield, ahead of their Premier League match with Huddersfield Town on Friday 26 April. The label, bottle and brew will all be red.

The 4.6% ABV pilsner uses a naturally red barley variety which gives the beer its colour, according to Carlsberg, which added the new brew was curated at Carlsberg’s research centre in Copenhagen. It will be brewed as a single batch overseen by the Carlsberg research lab, so will have no local production, a spokesperson told db.

The beer is made for the fans, so in each of Carlsberg’s markets, and distributed to fans internationally through local pubs and competitions after launching at the match itself. It will be available in the UK, Denmark, Sweden, Vietnam, China, India, and Hong Kong, “among others,” said Carlsberg.

The bottle commemorates manager Bill Shankly’s decision to play in an all red kit in 1964.

Birgitte Skadhauge, head of the Carlsberg research laboratory, said: “When we were set the challenge of brewing an all red beer for Liverpool FC fans, we knew it wouldn’t be easy.

“Unlike traditional red ales, the red colour of this pilsner comes from the outer-shell of the red barley variant – which has a relatively low climate-resistance and has therefore proved tricky to grow in the quantity we required for brewing.

“It’s taken over a year of experimentation, but we’re delighted that our team have finally been able to crack it.”

Recently, Carlsberg spent £20 million on a new ad campaign, which admits its flagship lager is “probably not the best beer in the world.”

It also launched a new Danish pilsner in the UK market. According to a survey of 160 lager drinkers in the UK carried out last December, some 59% of people preferred the taste of the new product to the brewer’s current core beer.

“We are answering a request for a better beer and reigniting interest in our flagship brand,” said Lynsey Woods, Carlsberg’s UK director of marketing.

“We will be grabbing the attention of UK drinkers and creating compelling reasons for them to experience the changes for themselves. This is all about getting drinkers to re-trial Carlsberg.”

The brewery has recruited actor Mads Mikkelsen to head up its new campaign, extolling the premium qualities of Danish pilsners.

Freeform Orders the Inevitable Quar Rom-Com, Love in the Time of...

China Reports Nearly 100 Deaths In A Single Day From Coronavirus...