The deaths in Canada of more than 1,000 aboriginal women and girls in recent decades was a national genocide, a government inquiry into murdered and missing indigenous women concluded in a report released on Monday.

The 1,200-page report, which resulted from an inquiry launched by Prime Minister Justin Trudeau‘s government in 2016, blamed the violence on long-standing discrimination against indigenous people and Canada’s failure to protect them.

It also made sweeping recommendations to prevent future violence against indigenous women.

The inquiry, which was beset by delays and staff resignations, opened painful wounds as it heard testimony from 468 family members of missing or murdered women.

“This colonialism, this discrimination and this genocide explains the high rates of violence against indigenous women, girls, 2SLGBTQQIA people,” Marion Buller, the chief commissioner of the inquiry, said at a ceremony held to present the report. The 2SLGBTQQIA group refers to two-spirit, lesbian, gay, bisexual, transgender, queer, questioning, intersex and asexual people.

“An absolute paradigm shift is required to dismantle colonialism in Canadian society. And this paradigm shift must come from all levels of government and public institutions,” Buller said.

The final report, called “Reclaiming Power and Place,” was presented during an often emotional ceremony in Gatineau, Quebec, near the Canadian capital, and was attended by some of the hundreds of family members of those missing or murdered, and by government officials including Trudeau. Its conclusions were first reported last week by Canadian media after the report was leaked.

While aboriginal people account for only about four percent of Canada’s population, they on average suffer from higher rates of crime, poverty and addiction. 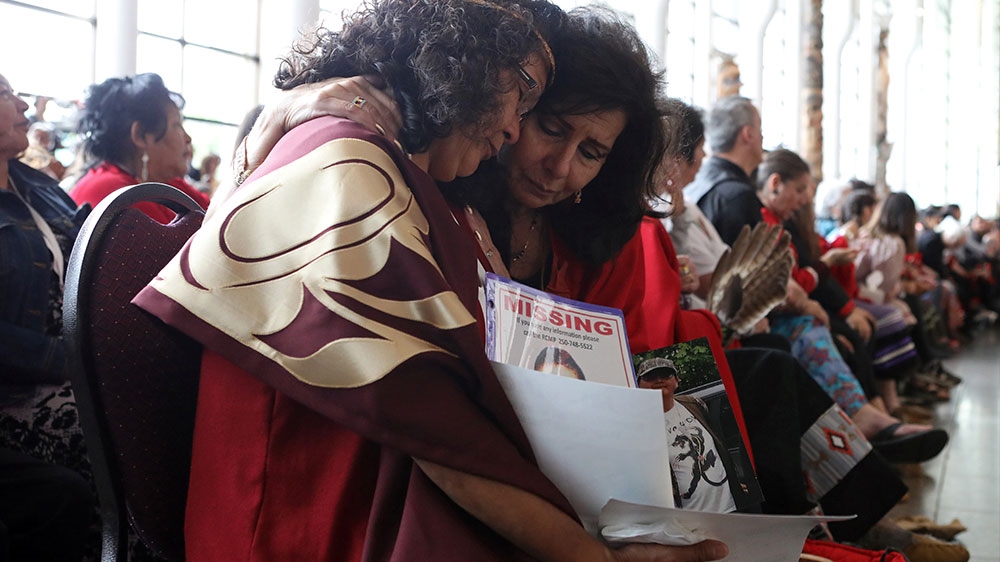 Women embrace during the closing ceremony of the National Inquiry into Missing and Murdered Indigenous Women and Girls in Gatineau, Quebec [Chris Wattie/Reuters]

“Today, when I go somewhere, I’m afraid, and it’s a fear that we all carry every day and you get so used to it that it’s like it’s part of you,” she said in testimony included in the final report. “I have seven daughters and lots of granddaughters that I worry about constantly all day. I don’t want them to become a statistic.”

Trudeau made Canada’s reconciliation for its colonial past a major plank of his 2015 campaign, and he has apologised for some of the country’s historical wrongs since taking office. Last month, he posthumously exonerated a Cree chief unjustly imprisoned for treason more than 130 years ago.

“To the missing and murdered indigenous women and girls of Canada, to their families, and to survivors – we have failed you. But we will fail you no longer,” Trudeau said, promising a national action plan to address the violence going forward.

“To the survivors and families here today, and to those watching or listening at home, I want you to know that this report is not the end,” he added. 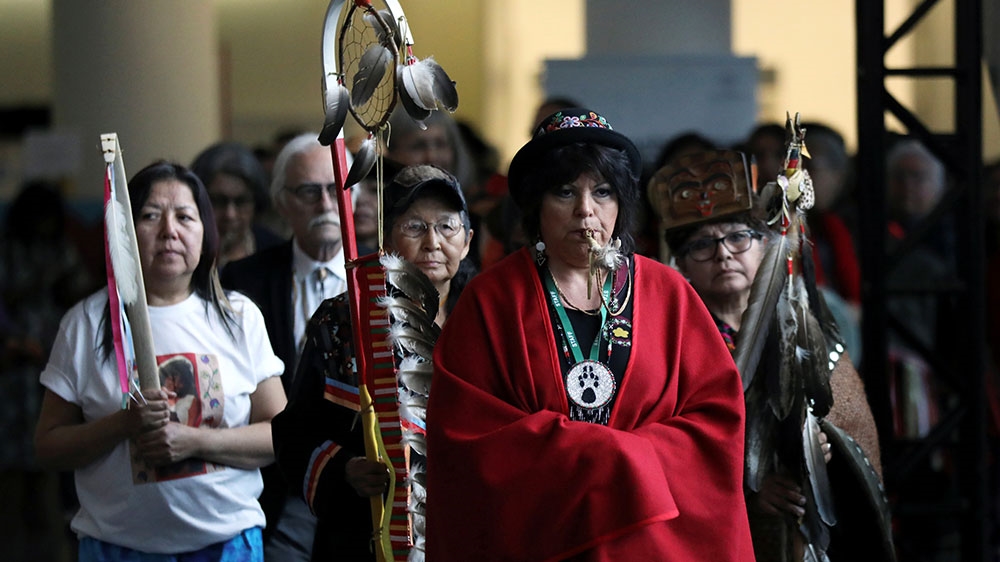 Women march in during the closing ceremony of the National Inquiry into Missing and Murdered Indigenous Women and Girls in Gatineau, Quebec, Canada [Chris Wattie/Reuters]

Perry Bellegarde, who heads the Assembly of First Nations, the umbrella group for the more than 600 aboriginal bands in Canada, urged immediate action on the back of the report.

“Lives are at stake. We cannot wait any longer for real action and real results to ensure the respect, safety and security of all First Nations at risk, and these efforts must be in coordination with survivors and families,” Bellegarde said.

Carrickfergus: Sensata Technologies to close factory with the loss of 270...

Olivia Colman reveals her love for ‘ultimate feminist’ the Queen –...

Jena Friedman: the outrageous talkshow host women have been waiting for...

Cole Anthony Would Like to Play for Hometown Knicks: ‘I Still...

The Syrian-Armenian ‘refugee’ jewellers of Yerevan