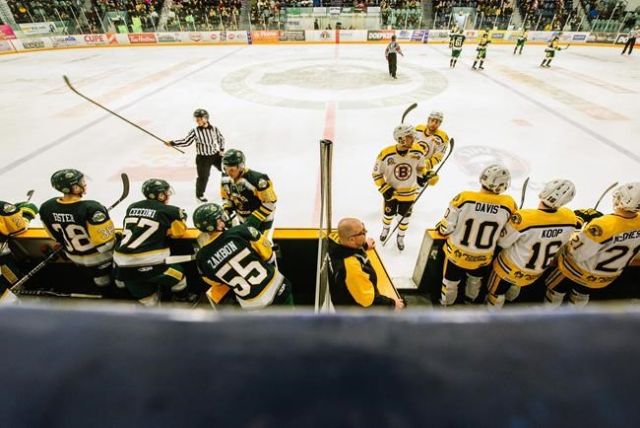 Hope the rebuilt Humboldt Broncos junior hockey team had of winning a championship a year after several players were killed in a bus crash has been dashed.

The Saskatchewan Junior Hockey League club bowed out of the post-season Tuesday night with a 3-2 overtime loss in Game 7 against the Estevan Bruins.

The Broncos had led the opening-round series three games to one, but lost the final three games.

Humboldt Mayor Rob Muench posted to Twitter that despite the loss, the team can still feel proud of its accomplishments.

The Broncos were on their way to a playoff game against the Nipawin Hawks on April 6, 2018, when their bus collided with a truck at a rural intersection, killing 16 people and injuring 13 others.

The Hawks went on to win the SJHL championship but, like the Broncos this year, they too have bowed out of the playoffs, losing 4-3 on Tuesday to the Yorkton Terriers in the seventh game of their series.

“Way to go Broncos! Although last night’s loss was heartbreaking, you have done our city proud. This season was an inspiration to all, hold your heads high!” Muench said in his post.

Revealed: The shops voted the worst (and best) on UK high...

China’s meteorite hunters: Adventurers hoping to get rich from rocks –...

Boris Johnson’s Brexit plan comes at a terrible time for the...

Man’s refusal to wear condom during sex, after agreeing to do...