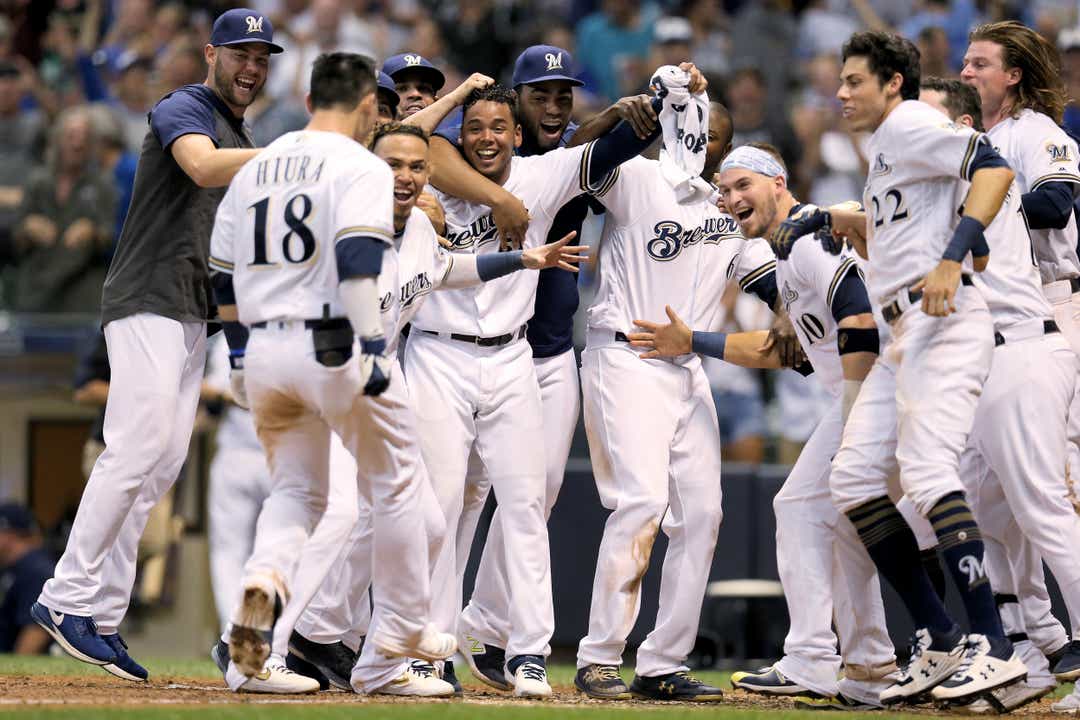 The Milwaukee Brewers gave closer Craig Kimbrel a rude welcome to the rivalry with the Chicago Cubs on Saturday night.

Christian Yelich homered to lead off the bottom of the 10th and Keston Hiura lined an opposite-field, two-run homer to win the game two batters later, giving the Brewers an electric 5-3 victory over the Cubs before a sellout crowd at Miller Park, their second comeback triumph in two nights.

The victory drew the Brewers even with the Cubs for second place in the NL Central, one game behind the St. Louis Cardinals.

It was the first time the Brewers faced Kimbrel, Chicago’s big in-season acquisition, and they quickly got the best of the meeting. Yelich greeted him with an opposite-field home run to tie the game, and after Tyler Saladino drew a walk, Hiura lined a breaking ball the other way and over the wall in right to win it.

After the Brewers scored two runs in the eighth to tie it, the game lapsed into extra innings, as so many Saturday affairs have this season. Chicago’s Albert Almora Jr. put his team in position to win by leading off the top of the 10th with a home run off reliever Freddy Peralta.

Shut out for seven innings by veteran lefty Jon Lester, the Brewers struck for two runs in the eighth against Chicago’s bullpen to tie the game. Side-arming righty Steve Cishek had a brief yet horrendous outing, surrendering a home run to pinch-hitter Ben Gamel and double to Lorenzo Cain on consecutive pitches.

Newly acquired lefty Derek Holland was summoned to face Christian Yelich, who flied out to deep center, moving Cain to third (Almora slipped and took out a divot trying to plant and throw). Right-hander Tyler Chatwood came on to retire Ryan Braun on a pop-up to first base but Hiura bounced an opposite-field double down the first-base line to tie the game.

For some time, the Cubs hid Lester from the Brewers, fearing they would steal everything but the payroll while he was on the mound. But Lester learned ways to compensate for his yips throwing to bases and is now allowed to face the Brewers, with great success.

NOTES: Brewers have time to consider their choices for starting pitchers

Lester blanked the Brewers on four hits for seven innings, lowering his ERA against them to 1.13 over his last five starts (four earned runs in 26 innings). In two outings against Milwaukee this year, Lester has allowed no earned runs in 13⅔ innings.

But the Brewers came to life after Lester exited, much as they did the previous evening after starter Kyle Hendricks departed. In that series opener, the Brewers scored three late runs against Chicago’s bullpen to take a 3-2 victory.

Chase Anderson started for the Brewers and turned in five strong innings, without anything to show for it. He allowed only two runs, coming on one swing of the bat by Anthony Rizzo in the third inning.

Rizzo won an eight-pitch battle with Anderson with two outs, sending a towering drive to right that dropped just over the wall and into the picnic area. Not only was it Rizzo’s first career home run against Anderson, it was only his second hit in 23 at-bats (.089).

In the meantime, Lester was dispatching the Brewers with little difficulty. A surprise bunt by Anderson for his first hit of the season and a walk to Cain put two on with no outs in the third but Yelich grounded into a double play, with shortstop Javy Baéz making a strong relay, and Braun flied out to right to end that threat.

For a brief instant in the sixth, the Brewers thought they had tied the game on a two-run homer down the left-field line by Hiura. But the Cubs asked the umpires to review it, and after an on-field discussion it was ruled to be a foul ball, which video replays confirmed.

Quintana, as always: Brewers manager Craig Counsell was not surprised when he heard lefty Jose Quintana would pitch against the Brewers on Sunday, and then again next weekend in Chicago. For the most part, Quintana has had tremendous success against Milwaukee (6-4, 2.63 ERA in 13 starts), and Cubs manager Joe Maddon makes sure he never misses the Brewers. “I assume Quintana will face us,” Counsell said. “They’ve made that clear that Quintana is going to face us. When we play the Cubs, I assume we’re going to face Quintana and another lefty.” The Brewers have put some huge dents in Quintana’s armor in two previous outings against him this season, however, scoring 11 runs in 9⅔ innings, leaving him with a 0-2 record and 10.24 ERA in those games.

Streaks continue: Yelich extended his hitting streak to 15 games with a single in the first inning and Hiura did likewise with his game-tying double in the eighth. Hiura tied Nori Aoki (2012) and Paul Molitor (1978) for the second-longest streaks by a rookie in club history. Pat Listach set the record with a 17-game streak in 1992.

Holland joins Cubs bullpen: Another lefty the Brewers figure to see plenty when they face the Cubs moving forward is Holland, acquired in a trade with Arizona. Holland has been very effective against left-handed hitters this season, holding them to a .182 batting average and .195 slugging percentage with no home runs. “It makes a difference to have another (lefty) down there,” Counsell said. “You’ve seen how the last month or so has gone with Yelich and ‘Moose’ (Mike Moustakas). They’re facing the lefties as much as (opponents) can from the bullpen. That’s how teams are going to do it. We know that.”

Nelson back to San Antonio: Right-hander Jimmy Nelson will pitch for a second time on rehab assignment for Class AAA San Antonio on Sunday when the Missions play in Omaha. Nelson, recovering from an elbow issue that occurred while coming back from major shoulder surgery in September 2017, is slated to pitch two innings. Nelson said the next step after that will be to pitch on back-to-back days, with hopes of being ready to rejoin the Brewers’ bullpen. Of his elbow, Nelson said, “It’s responding well. It’s just a matter of managing it from day to day.”

Hader sharp as ever: Counsell thought reliever Josh Hader was as sharp with his pitches as he has been all season Friday night in nailing down the ninth inning of the 3-2 victory over the Cubs. Pitching on only one day of rest after covering two innings Wednesday against Cincinnati, Hader threw 13 of 17 pitches for strikes while recording two strikeouts. “His stuff was on point,” Counsell said. “He has flashed higher velocity but command is still what wins the day for pitchers. Even the guys that throw in the upper 90s. If the ball is commanded, it’s really tough to hit.”

Tony Blair answers the questions others try to avoid – Sky...

Trump vetoes measure to end US involvement in Yemen war

Luke Perry Would Give KJ Apa’s Parents Weekly Updates About Their...

Dow industrials threaten to fall back into correction territory – MarketWatch

Canzano: Blowing the whistle on Oregon State football after loss to...

Alonso was ‘very far away’ from good lap during Bahrain NASCAR...