Brazilian rescue crews returned to mud-covered flats Sunday to resume the search for hundreds of people missing in the wake of a dam collapse after the operation was suspended for several hours over fears that a second dam was at risk of breach.

The Civil Defence office in Minais Gerais state raised the confirmed death toll to 58, with up to 300 people still missing following the avalanche of iron ore waste from a mine Friday.

Earlier Sunday, authorities stopped the search and evacuated several neighbourhoods in the southeastern city of Brumadinho that were within range of the second B6 dam owned by the Brazilian mining company Vale. An estimated 24,000 people were told to get to higher ground, but by the afternoon civil engineers said the second dam was no longer at risk.

“Get out searching!” a woman yelled at firefighters near a refugee set up in the center of Brumadinho. “They could be out there in the bush.”

Areas of water-soaked mud appeared to be drying out, which could help firefighters get to areas previously unreachable.

Even before the brief suspension of rescue efforts, hope that loved ones had survived a tsunami of iron ore mine waste from Friday’s dam collapse was turning to anguish and anger over the increasing likelihood that many of the missing had died.

‘There was no siren’

There was also mounting anger at Vale and questions about an apparent lack of an alarm system Friday.

Caroline Steifeld, who was was able to flee the area, said she heard warning sirens Sunday, but no such alert on the day the dam collapsed.

“I only heard shouting, people saying to get out. I had to run with my family to get to higher ground, but there was no siren,” she said, adding that a cousin was still unaccounted for. 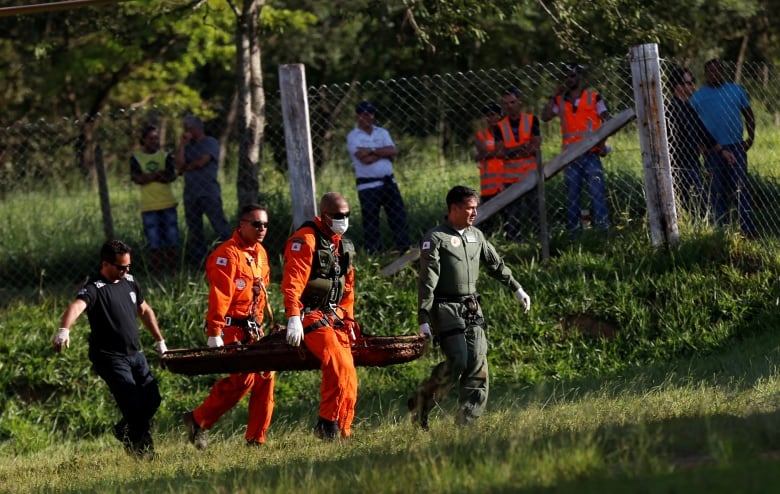 Several others made similar complaints when interviewed by The Associated Press. In an email, Vale told the AP that the area has eight sirens in the area, but “the speed in which the event happened made sounding an alarm impossible” in the dam that collapsed.

“I’m angry. There is no way I can stay calm,” Sonia Fatima da Silva said as she tried to get information about her son, who had worked at Vale for 20 years. “My hope is that they be honest. I want news, even if it’s bad.”

Da Silva said she last spoke to her son before he went to work Friday, when around midday a dam holding back mine waste collapsed, sending waves of mud for kilometres and burying much in its path. 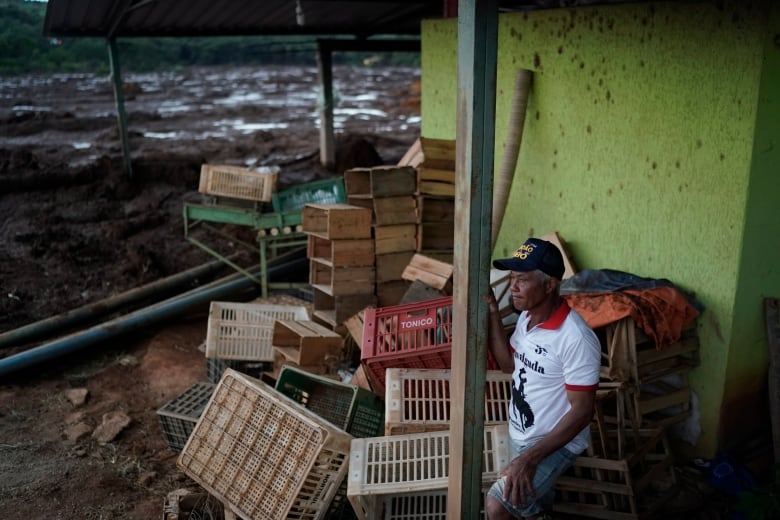 The muddy tailings of an iron ore mine swept past this market after the facility’s dam ruptured in Brumadinho on Friday, Jan. 25. (Leo Correa/Associated Press)

She was one of dozens of people in Brumadinho who desperately awaited word on their loved ones.

Romeu Zema, the governor of Minas Gerais state, said that by now most recovery efforts will entail pulling out bodies.

The flow of waste reached the nearby community of Vila Ferteco and an occupied Vale administrative office. It buried buildings to their rooftops and an extensive field of the mud cut off roads.

Some residents barely escaped with their lives.

“I saw all the mud coming down the hill, snapping the trees as it descended. It was a tremendous noise,” said a tearful Simone Pedrosa, from the neighbourhood of Parque Cachoeira, 8 kilometres from where the dam collapsed.

Pedrosa, 45, and her parents dashed to their car and drove to the highest point in the neighbourhood. 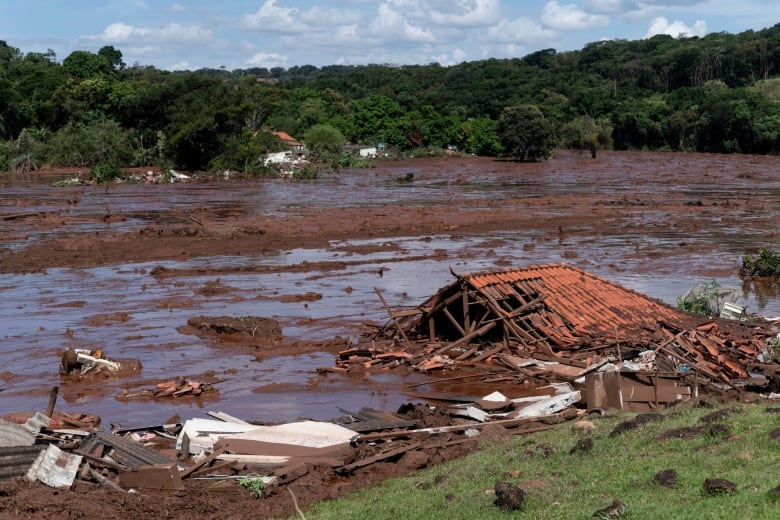 Here, the flow of waste can be seen in the community of Vila Ferteco in southeastern Brazil. (Leo Drumond/Nitro via AP)

“If we had gone down the other direction, we would have died,” Pedrosa said.

In addition to the dead, 23 people were hospitalized, according to the Minas Gerais fire department. There had been some signs of hope earlier Saturday when authorities found 43 more people alive. 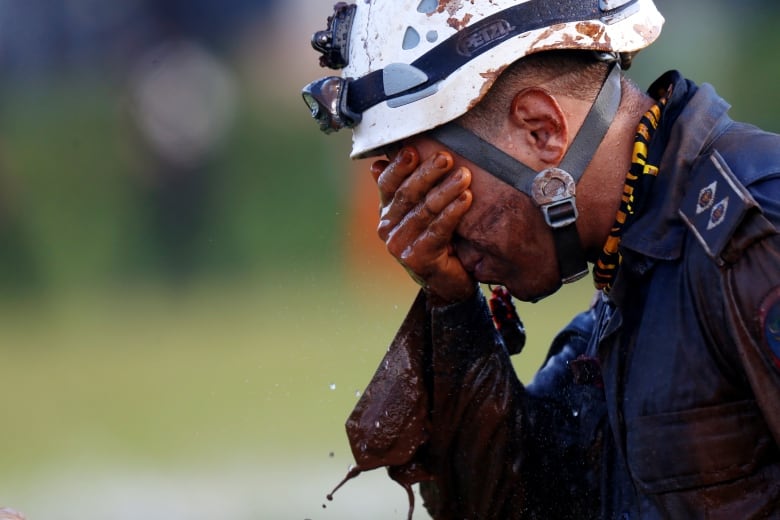 A member of rescue team is seen on Sunday. (Adriano Machado/Reuters)

For many, hope was evaporating.

“I don’t think he is alive,” said Joao Bosco, speaking of his cousin, Jorge Luis Ferreira, who worked for Vale. “Right now, I can only hope for a miracle.”

Vanilza Sueli Oliveira described the wait for news of her nephew as “distressing, maddening.”

According to Vale’s website, the waste is composed mostly of sand and is non-toxic. However, a UN report found that the waste from a similar disaster in 2015 “contained high levels of toxic heavy metals.”

Over the weekend, state courts and the justice ministry in the state of Minas Gerais froze about $1.5 US billion from Vale assets for state emergency services and told the company to report on how they would help the victims. 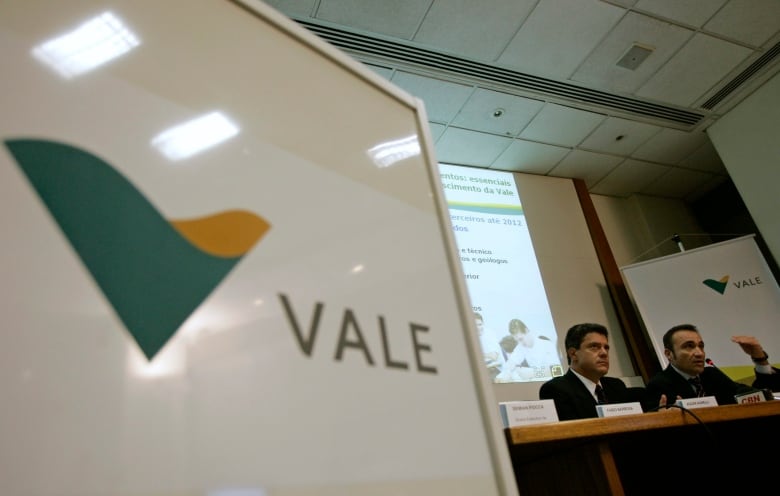 Over the weekend, state courts and the justice ministry in the state of Minas Gerais froze about $1.5 billion US from Vale assets for state emergency services and told the company to report on how they would help the victims. (Silvia Izquierdo/Associated Press)

Neither the company nor authorities had reported why the dam failed, but Attorney General Raquel Dodge promised to investigate it, saying “someone is definitely at fault.” Dodge noted there are 600 mines in the state of Minas Gerais alone that are classified as being at risk of rupture.

Another dam administered by Vale and Australian mining company BHP Billiton collapsed in 2015 in the city of Mariana in the same state of Minas Gerais, resulting in 19 deaths and forcing hundreds from their homes. Considered the worst environmental disaster in Brazilian history, it left 250,000 people without drinking water and killed thousands of fish. An estimated 60 million cubic metres of waste flooded nearby rivers and eventually flowed into the Atlantic Ocean.

Sueli de Oliveira Costa, who hadn’t heard from her husband since Friday, had harsh words for the mining company. 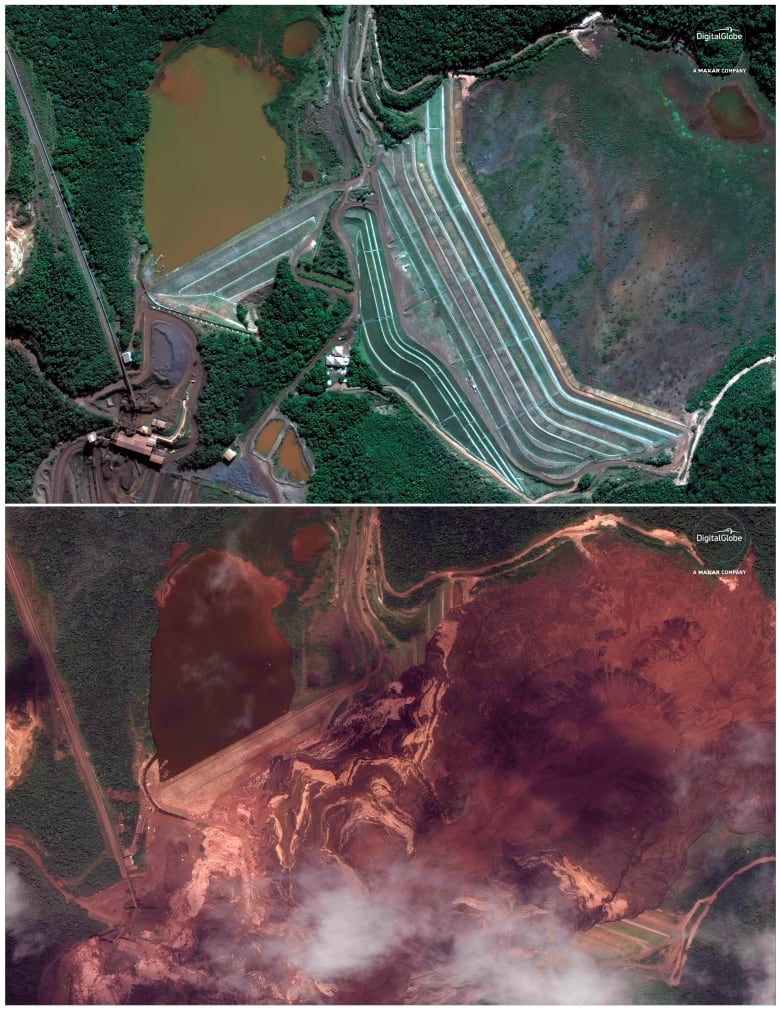 This combo of satellite images provided by DigitalGlobe shows an area northeast of Brumadinho in June 2018, top, and the area seen on Saturday. (DigitalGlobe, a Maxar company via AP)

The Folha de Sao Paulo newspaper reported Saturday that the dam’s mining complex was issued an expedited license to expand in December due to “decreased risk.” Conservation groups in the area alleged that the approval was unlawful.

On Twitter, new Brazilian President Jair Bolsonaro said his government would do everything it could to “prevent more tragedies” like Mariana and now Brumadinho.

The far-right leader campaigned on promises to jump-start Brazil’s economy, in part by deregulating mining and other industries.

Environmental groups and activists said the latest spill underscored the lack of environmental regulation in Brazil, and many promised to fight any further deregulation.

Marina Silva, a former environmental minister and presidential candidate, said such tragedies should be deemed “heinous crimes,” and that Congress should bear part of the blame for not toughening regulations and enforcement.

When gunman advanced on Christchurch mosque, one man ran at him

And now their watch is ended: How fans are bracing for...