Syrian and Russian air raids killed at least 50 people and wounded scores in northwestern Syria on Monday, most of them in a crowded market in rebel-held territory of Idlib, rescuers and residents said.

At least 36 civilians and two unidentified persons were killed in the attack on a vegetable market in the town of Maarat al-Numan in Idlib province.

Men covered in blood were carried away from the market by residents and rescue workers, who used mattresses as makeshift stretchers, an AFP photographer said.

Activists said black smoke billowed over the city centre and citizens were on the street crying for help.

“Bodies are lying on the streets. May God take revenge on [Russian President Vladimir] Putin and [Syrian President Bashar al-Assad] for their crimes,” Abdul Rahman al-Yasser, a rescuer from Idlib’s civil defence team, told Reuters news agency. He was searching for bodies under the rubble.

The head of the local hospital, Radwan Shardub, described his horror at seeing “burnt and carbonised bodies and body parts”. 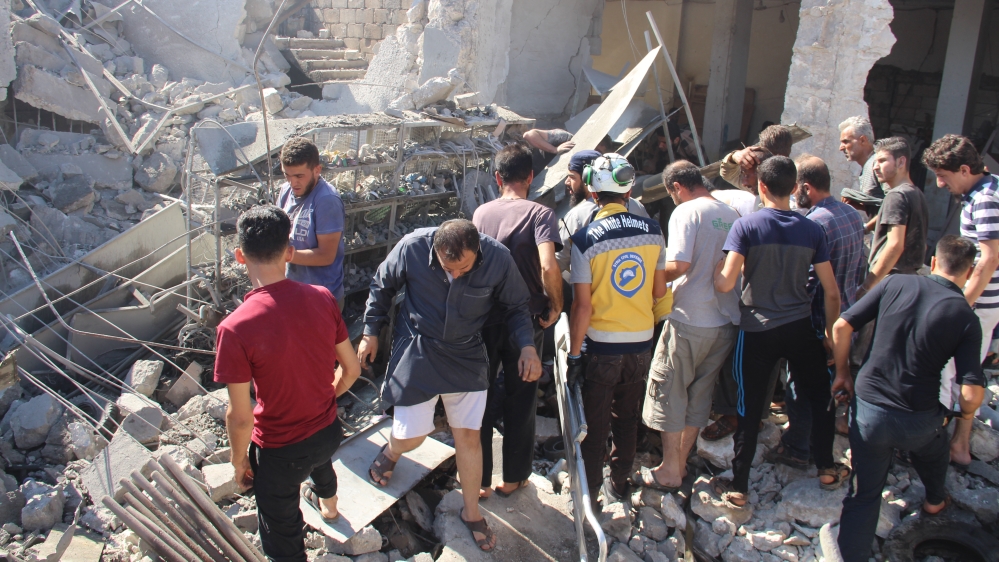 The White Helmets rescue group said one of its volunteers was killed during the raids, raising the number of rescue workers killed since April to at least six.

Another 12 civilians were killed in government air raids in other parts of Idlib on Monday, the Britain-based Syrian Observatory for Human Rights (SOHR), which monitors the fighting on the ground in Syria through a network of activists, said.

The region has witnessed intensive air attacks and bombardment on a daily basis as Syrian troops, backed by Russian air cover, try to push their way into the enclave near the Turkish border.

Idlib province is the last major rebel stronghold in the country outside the control of Assad forces.

Since the Syrian military launched its Idlib offensive in late April, more than 2,000 people have been killed and hundreds of thousands displaced.

Reporting from Beirut, Al Jazeera’s Zeina Khodr said crowded markets had been targeted during the campaign.

“Almost 700 people have been killed in recent weeks. This is kilometres away from the frontline but this is what the Syrian government has been doing,” Khodr said.

“They target civilian neighbourhoods, civilian infrastructure, in order to force the rebels to surrender. But the rebels are not surrendering. In fact, what they are doing is putting up a fight and holding ground.”

SOHR, the Britain-based war monitor, said the number of casualties from Monday’s air raid was likely to rise because of the large number of wounded.

Russia denied it was responsible for the air attack calling the reports “fake”.

“The Russian air force was not carrying out any missions in this part of Syria,” said a defence ministry statement.

On Sunday, government bombing in Idlib killed at least 18 people, including a young citizen journalist, according to rescue workers and a war monitor.

Anas al-Dyab, a photographer and videographer in his early 20s, was a member of the White Helmets rescue group who also contributed to the AFP news agency. It reported he was killed in his hometown of Khan Sheikhoun while trying to film the air raids. 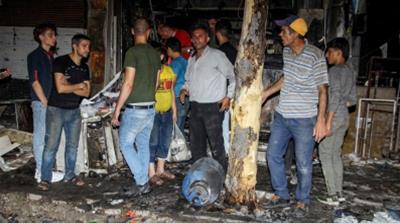 Government air raids killed 17 other civilians, including seven children, in other parts of the region on Sunday, according to SOHR.

Despite the heavy bombardment, Assad’s troops have been unable to make significant advances against the rebels or the al-Qaeda-linked fighters and other groups who dominate Idlib province.

Russia and the Syrian army deny allegations of indiscriminate bombing of civilian areas and say they are fighting al-Qaeda-inspired armed groups.

Armed groups have hit back hard, killing an average of more than a dozen soldiers and allied fighters a day in recent weeks.

The struggling campaign underscores the limits of Syria and Russia’s air power and inability to achieve a definitive victory in the country’s long-running civil war, now in its ninth year.

Forum voor Democratie: Why has the Dutch far right surged?

Netflix’s Sex Education review: a sweet and raunchy charmer of a...

Iran sentences one person to death for spying for the US:...