London, United Kingdom – Thousands of anti-Brexit demonstrators have marched on the streets of London in the latest bid to show opposition to the United Kingdom leaving the European Union, and against the ruling Conservative Party’s shift towards a no-deal Brexit.

The march on Saturday – which went by the slogan “No to Boris, Yes to Europe” – was a more explicit call for the UK to remain in the EU than previous demonstrations, which focused on demanding a second referendum on the terms of Britain’s exit from the bloc.

The protest came days before the UK is due to install a new prime minister, as the Conservatives go through the last round of voting to elect the party’s new leader.

The two contenders for the post are former foreign secretary Boris Johnson, tipped as the frontrunner, and his successor, Jeremy Hunt.

An inflatable “Boris blimp” was flown over the city’s Parliament Square before protesters began gathering for the rally after marching through Trafalgar Square from the famous Hyde Park.

Inspired by the “baby Trump blimp” depicting the US president as a screaming baby, it portrayed the Conservative frontrunner wearing a t-shirt emblazoned with a bus featuring the £350m figure.

The image was a reference to Johnson’s infamous claim about EU funds that would be redirected to the UK’s National Health Service (NHS) after Brexit, which critics said was a misuse of statistics. 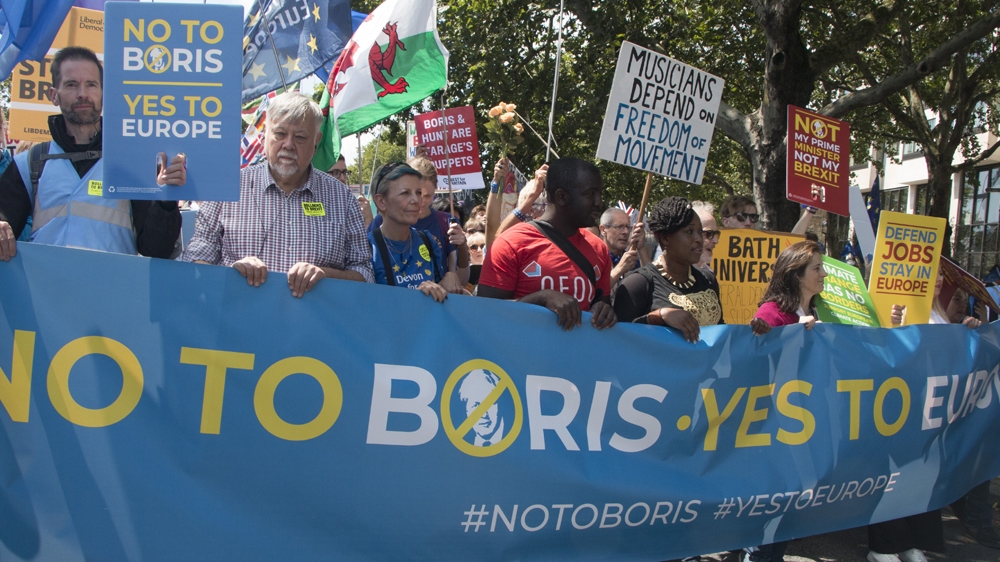 The march set off from Park Lane to chants of ‘Revoke, remain; Brexit is a shame’ [Ylenia Gostoli/Al Jazeera]

As the march set off from Park Lane to chants of “Revoke, remain; Brexit is a shame,” a nine-feet “puppet master” Nigel Farage on stilts emerged, pulling the strings on two papier-mache figures of Johnson and Hunt.

The Brexit Party was founded by former UKIP leader and Brexit architect Nigel Farage just before the European elections in May.

The party quickly shot up in the polls after the UK’s exit from the EU was pushed back from its original March deadline. It went on the win the European polls in the UK with more than 30 percent of the vote. The Conservatives came fifth behind the Greens.

Meanwhile, the decision of 160,000 members of the Conservative Party as to who will be Britain’s next prime minister will be announced on Tuesday.

“It very much looks like it’s Boris Johnson who is going to be our prime minister, elected by a very small number of people, less than 0.2 percent of the population, because some [Conservative Party members] will have voted for Hunt,” Smith said.

“They’re not representative of modern Britain because they are older, wealthier and whiter than the rest of the country.”

Both candidates have promised to renegotiate the withdrawal agreement with the EU and its most controversial part, the backstop protocol – an insurance mechanism which aims at keeping an open border in the island of Ireland.

Should that fail, they have vowed to take the UK out of the EU without a deal on October 31, the new Brexit deadline.

“I feel as if Boris Johnson and the Conservative Party are willing to sell Northern Ireland, Scotland and Wales so that they can achieve their vision for Brexit,” Peter Benson, a 55-year-old accountant originally from the Republic of Ireland, told Al Jazeera at the protest.

“We would travel up to Northern Ireland and go through a military checkpoint where you had guns pointed at you,” Benson said, referring to the 30-year conflict in Northern Ireland known as the Troubles, which formally ended with the Good Friday Agreement in 1998.

“Then, we had a peace process and that is threatened now,” he said. 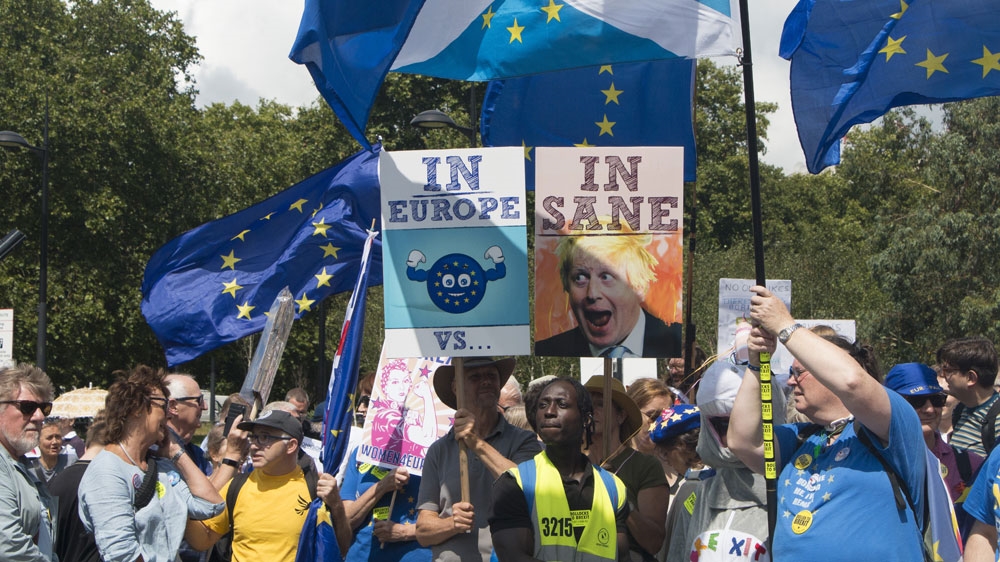 An amendment to the Northern Ireland bill passed on Thursday by the House of Commons will make it more difficult for the next prime minister to prorogue Parliament, that is, to stop its activities without dissolving it – to force through a no-deal Brexit.

‘Stuck with one party’

Alex Goads, an engineer who is a part of the People’s Vote campaign, said he was at the march “to support the campaign for remaining, eventually, in the European Union”.

The People’s Vote campaign calls for a second Brexit referendum and has drawn hundreds of thousands of people to the streets in previous demonstrations, arguing in favour of a public vote on the deal that would include “Remain” as an option.

“We’re now stuck with one party being able to choose two leaders in succession, neither of which had won a popular mandate,” said another supporter of the People’s Vote campaign, 64-year-old tax executive Andrew Webb.

A recent poll has shown the Brexit divide has deepened since the UK’s exit was delayed, with more and more Britons supporting either a no-deal Brexit – 48 percent – or revoking Article 50 – 33 percent.

“We think that building barriers between people across Europe is counterproductive to organising workers across different countries,” said 31-year-old Gemma.

Gemma belongs to the Trotskyist group Workers’ Liberty, which is a part of the pro-EU Left Bloc. Unlike some radical left groups arguing the EU can’t be reformed, Workers’ Liberty wants to “remain and democratise”.

“Boris Johnson is likely to take Britain in a Trump-type direction, but I don’t think Hunt is any better on the main issues,” she told Al Jazeera.

Naomi Smith of Best for Britain said their mission is to stop Brexit “by any democratic means”.

“Another referendum is one of those means,” said Smith.

“But there are other options as well. Maybe our parliament will decide to revoke Article 50, maybe we will get another general election that will effectively be fought in the same terms as a referendum would be.” 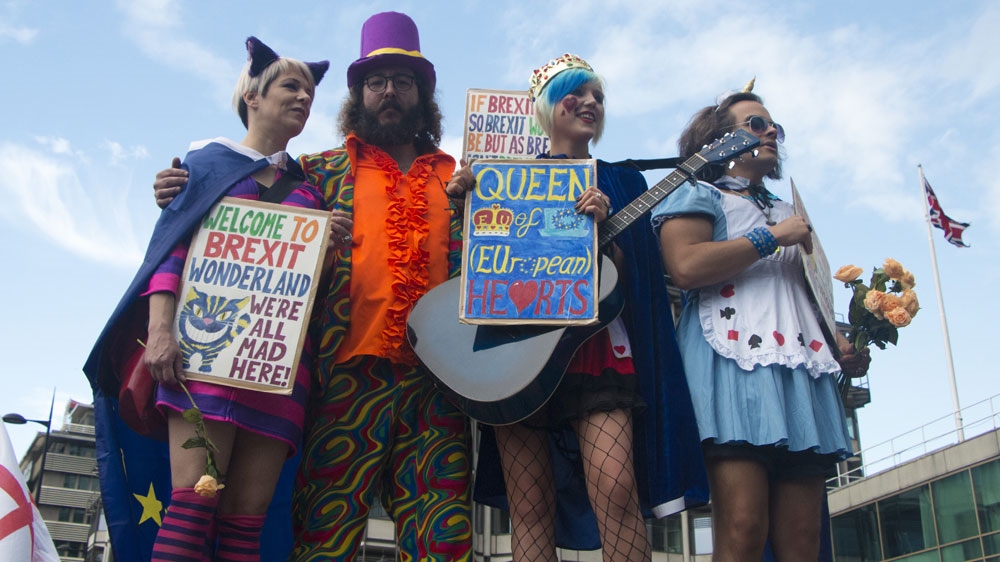 George Floyd death: Pressure mounts for US officers to be charged

Bolton was fired after disagreeing with Trump on Iran: Report