Raphael Bob-Waksberg sets the stage for a turbulent Part 2, but the first eight episodes of “BoJack’s” final season are more fun than you might expect.

Through five outstanding seasons, “BoJack Horseman” has spurred a disproportionate number of conversations about its dark storylines; an inevitable result of pairing its medium — historically, animation has been reserved for cartoons and comedy — with a plot about depression, addiction, and looking for help in all the wrong places. In Season 6, BoJack (voiced by Will Arnett) starts looking in the right places — namely, a rehabilitation center called Pastiches — and his eight-episode trek is a shade lighter, still extremely funny, and largely positive. BoJack is going through the steps to recovery, and creator, writer, and executive producer Raphael Bob-Waksberg builds a staircase from clever and uplifting baseboards.

But it would be wrong to claim “BoJack” is suddenly a fun show, or even that there’s a tonal shift in its swan song. First, it’s always been exceptionally, unquantifiably funny — those elements are just harder to talk (or write) about. Second, and more relevant when describing this final season, we’ve only seen half of the journey. Netflix’s decision to break “BoJack” Season 6 into two parts (one now, the second in January 2020) didn’t alter the structure of the show, just its release. While Part 1 ends on a cliffhanger that certainly works as a stopping point, typically the rush of episodes would continue, and whatever peace BoJack has found would be upended by what always throws him back into a spiral: life itself.

For a show eager to address a lot of relevant topics, Season 6 has a steady, startling throughline: BoJack is trying. And he’s not just talking about trying, or trying when he feels like it, or trying to try — he’s actually doing the work. In the opening montage, Bob-Waksberg & Co. speed through the dejected stage of BoJack’s early treatment, showing him sleeping through a group yoga class or getting carried to the start of a hike (and falling over as soon as the nurses let go). But then he sees a photograph of Sarah Lynn, the innocent child actor-turned-troubled pop star who worked with BoJack on “Horsin’ Around” and later died from a heroin overdose while on a bender with her former co-star. (OK, yes, the show does get very dark.)

Remembering Sarah Lynn focuses BoJack and, in that same montage, he starts putting in the effort. He climbs to the top of the mountain, stretches skyward for morning yoga, and even takes a selfie with the pushy check-in clerk. After the first episode explores BoJack’s long-term relationship with alcohol — from using it to dispel nerves on set to being drugged by his own father as abusive bribery — BoJack continues his recovery as a peripheral part of other characters’ stories. He calls Princess Carolyn (Amy Sedaris) to apologize for being such a problem, but although Episode 2, “The New Client,” tracks BoJack’s development through a few phone calls, Carolyn is the focus as she tries to add her single parent duties to a growing list of work responsibilities. 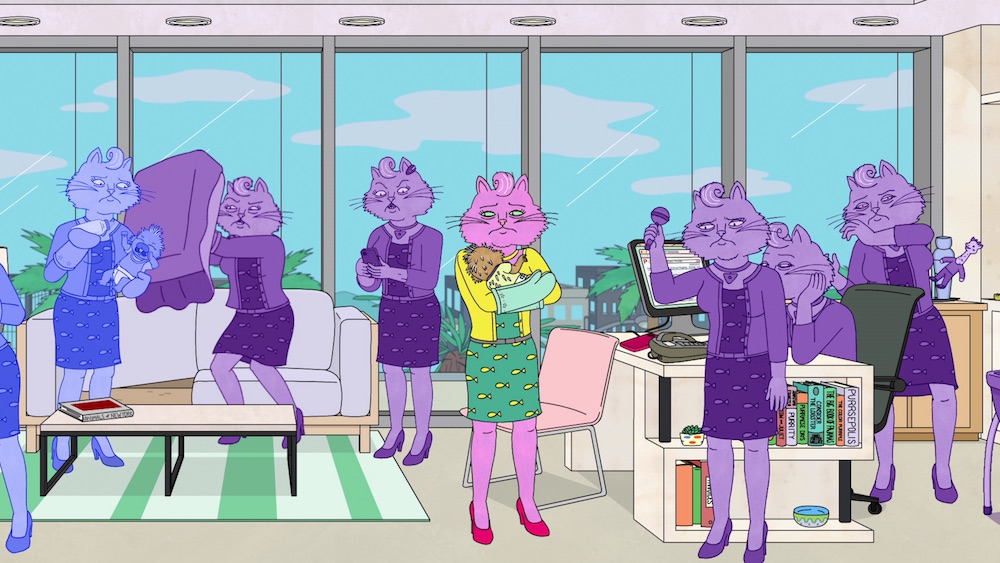 Always attentive to its strong ensemble, Episode 3, “Feel Good Story,” shifts to Diane (Alison Brie), who’s traveling across the midwest with her new cameraman-boyfriend Guy (Lakeith Stanfield), producing videos for Girl Croosh on everything from the migrant sex trade to corporate oligopolies. BoJack appears only in narration, talking over Diane’s struggle to justify her own happiness via letters he’s writing from rehab. Episode 4, “Surprise!”, sees BoJack give Mr. PeanutButter good, selfless advice without even being asked, and by then it’s clearer than ever: This is what “BoJack Horseman” would’ve looked like all along if its star wasn’t an alcoholic asshole.

Getting to this point required going through the prior darkness, but these eight surprisingly enjoyable episodes are particularly moving because it feels like lasting change is possible. BoJack has sought out the right tools and started using them — finally — and it’s such a relief to live in his upward recovery for once instead of a downward spiral. All the bumpy, intermittent growth over the past five hard years smooths out as BoJack removes himself from his friends’ daily lives until he’s safe to reengage. Therein lies the rub, the shoe about to drop, the cliffhanger ending that will drive the back-half of Season 6: BoJack still has to take responsibility for his mistakes and admit he was wrong.

Sarah Lynn represents one of his most damaging transgressions, while getting caught in bed with Penny, his ex-girlfriend Charlotte’s teenage daughter, is another. Both are brought to the forefront in the final episode of Part 1, and both are brought up without BoJack around. It’s especially important to hear the latter story from another perspective, not because the Season 2 episode wasn’t hard enough on BoJack (it was) but because the reminder, years later, needs to come from the victim — aka Hollyhock’s new party friend, Peter, who turns out to be the same Peter who went to prom on a double date with his girlfriend, Maggie, alongside Penny and BoJack. To hear him tell it, some old guy took a group of teens to their seminal high school dance, got them drunk, and abandoned two of them at the hospital. Peter doesn’t even know what happened later, but the beginning is bad enough: BoJack is the unnamed man in Peter’s story, the one who screwed him up for years after, and Hollyhock is about to find out.

Once she finds out, BoJack will find out, and he’ll have to hold himself accountable… or go spiraling down a booze-filled hole yet again. Worse yet, it appears that he’ll have to account for his role in Sarah Lynn’s death, as two old-timey (and thus very dedicated) reporters are intent on tracking down the actress’ drinking buddy from the night of her death. These two stories set the table for a turbulent, traumatic, and confrontational last set of episodes, as we wait to see how BoJack will respond to how his past actions hurt people he supposedly cares about. 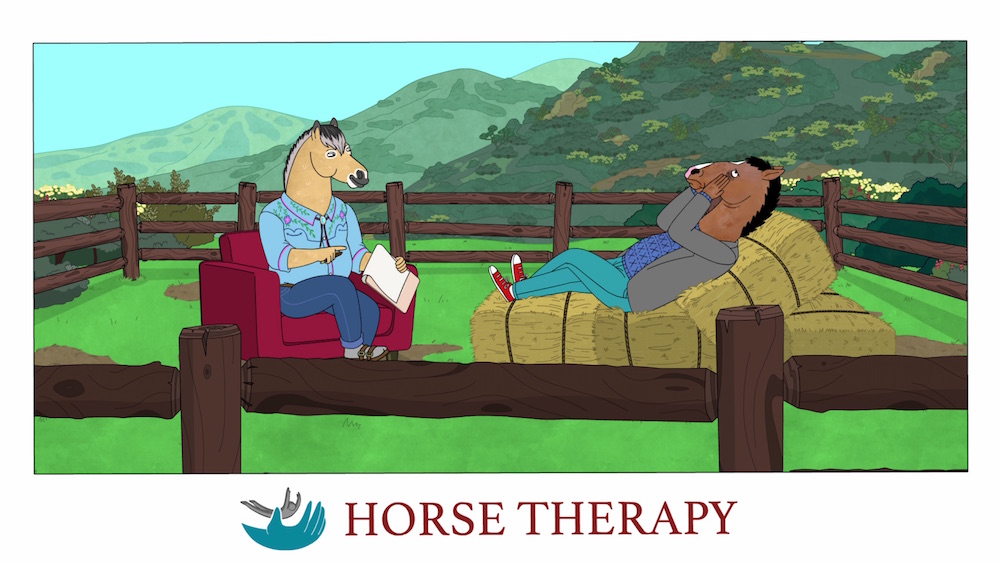 Episode 6, “The Kidney Stays in the Picture,” offers a small-picture preview of the demons BoJack will face. After accidentally exposing his sober therapist, Doctor Champ (voiced by Sam Richardson, whose contributions to Season 6 are as plentiful as they are excellent), to a water bottle full of vodka, BoJack takes care of the man meant to take care of him. First, he stays with him overnight to make sure no one from the center knows one of their doctors fell off the wagon. Next, he puts Doctor (which is apparently Champ’s first name) into another rehab facility, when it’s clear he won’t quit on his own. (Side note: If co-executive producer and horse enthusiast Lisa Hanawalt didn’t come up with the Equine Therapy puns, I’ll eat some hay.)

In the past, BoJack has spiraled when he starts blaming himself for everything; when he believes, no matter what his intentions or efforts, that he’ll only end up hurting people. He spiraled after Penny, after Sarah Lynn, after “Horsin’ Around” creator Herb Kazzaz, after so many other mistakes with Diane and Todd and others. But what this episode illustrates is that accidents happen. BoJack was trying to do the right thing when he threw that vodka bottle out the window, and then he tried to stop anyone from drinking it — but he was too late. Doctor Champ drank it before BoJack could warn him. BoJack immediately admitted he was wrong and took responsibility for his mistake.

And yet… he can walk away from Doctor Champ, not Hollyhock. And what about his reputation? Can he give up the adoration of innumerable faceless fans that he’s been chasing his entire career? To survive these final eight episodes, he might have to — hard times lie ahead, so savor this particular chunk of good times. The road to recovery never ends, but “BoJack’s” exit is coming up.

Sign Up: Stay on top of the latest breaking film and TV news! Sign up for our Email Newsletters here.

Scientists uncover new evidence of the asteroid that killed off the...

‘My baby got killed for nothing;’ mother of 2 identified by...