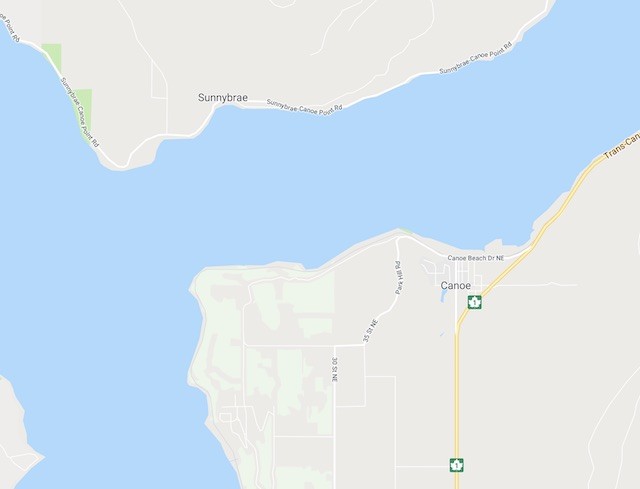 Staff Sgt. Scott West of the Salmon Arm RCMP detachment said Search and Rescue crews from Sicamous joined the RCMP and ambulance at the scene between Canoe and Sicamous just after 8:20 p.m.

“Two large speed boats had been travelling in tandem on the lake and between 8 and 8:20 p.m. there was an incident,” West said in a release. “One of the boats lost control and ejected the two occupants out of the cockpit of the boat and into the lake.”

A 25-year-old woman was rescued from the water by occupants of the other boat. She was believed to have sustained serious injuries at the time and was transported to Kelowna hospital for treatment, West said.

The area of the lake where this incident occurred is 250 to 350 feet in depth.

“The vessels involved have been recovered and are in police custody at this time as the investigation into the factors leading to this tragic incident continues,” West said.

A witness said two boats were racing at around 8 p.m. when there was a collision that sent four people into the water.

Two men were initially able to climb back into their boat, while a man and woman on the second boat were ejected from their craft.

The woman was rescued after the men from the first boat saw her in the water suffering from injuries from the collision. The pair then jumped in the water to save her.

The man piloting the second boat has been missing since 9:30 p.m. Sunday night, the witness said. The rescued woman was taken to hospital.

Search and Rescue attended and carried out a search but they were called off after 1 a.m. when the RCMP took over the investigation, a witness told Castanet.

Family members and friends were out in their boats early Monday morning looking for the missing man, witnesses said, as the northern lights provided some visibility on the dark lake. The volunteer search effort continues at this hour.

The crash happened about 150 feet from shore near Canoe on the south end of the lake.

A witness told Castanet that the missing man is from Kelowna and in his early 30s.

Take away my vape and you’ll end the habit of a...

Brexit jargon: From backstop to no deal, 17 key terms explained

Like lambs to slaughter: How Brexit could crush Welsh abattoirs

A Couple Finds an Old Lottery Ticket While Cleaning for Thanksgiving...

Gender comes to the forefront as Warren, Sanders clash at final...