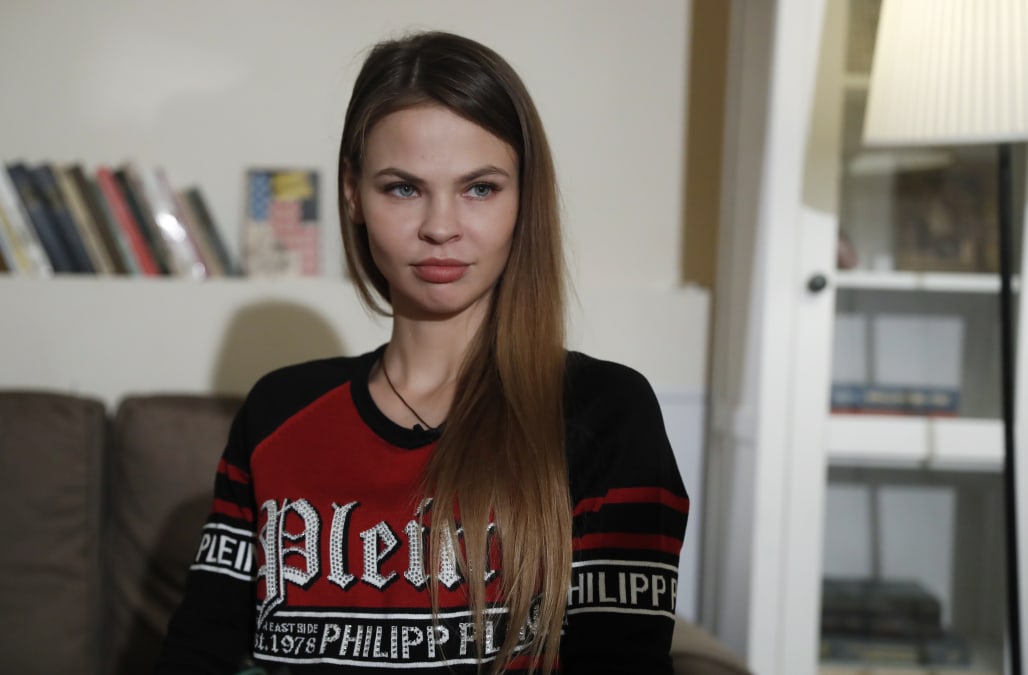 MOSCOW (AP) — A Belarusian model who claims to have information on ties between Russia and Donald Trump’s election campaign told The Associated Press on Friday that she has turned that material over to Russian billionaire businessman Oleg Deripaska.

Anastasia Vashukevich fueled speculation around possible ties between Trump and the Kremlin last year when she posted a video from a police van, saying she had 16 hours of audio and video proving ties between Russian officials and the Trump campaign that influenced the 2016 U.S. elections.

Deripaska denied the allegations and even went to court to seek to remove the video Vashukevich posted in which he discusses U.S.-Russia ties with a senior Russian government official.

Vashukevich, who is also known as Nastya Rybka, returned to Russia last month almost a year after she was detained in Thailand on charges of soliciting sex, in what some believe was an attempt to silence her.

Vashukevich, 28, told the AP in an interview Friday that, contrary to earlier reports that she had destroyed the recordings, she had given them to Deripaska because it “relates to him” and that she “did not want any more trouble.”

Anastasia Vashukevich leaves the Pattaya Provincial Court in Chonburi province, Thailand, Monday, Aug. 20, 2018. Vashukevich, from Belarus, who claimed to have information linking Russian interference to the election of President Donald Trump says she no longer has the evidence and will not talk about it. On Monday she pleaded innocent as her trial in Thailand began on charges of soliciting and conspiracy to solicit. (AP Photo/Sakchai Lalit)

Belarusian model Anastasia Vashukevich is escorted by Thai Immigration police officers from the Immigration Detention Center towards a vehicle to take her to an airport for deportation in Bangkok, Thailand, Thursday, Jan. 17, 2019. Thai officials say they are deporting Vashukevich who claimed last year that she had evidence of Russian involvement in helping elect Donald Trump president. (AP Photo/Sakchai Lalit)

Belarusian model Anastasia Vashukevich talks to journalists as she is escorted from the Immigration Detention Center towards a vehicle to take her to an airport for deportation in Bangkok, Thailand, Thursday, Jan. 17, 2019. Thai officials say they are deporting Vashukevich who claimed last year that she had evidence of Russian involvement in helping elect Donald Trump president. (AP Photo/Sakchai Lalit)

Thai Immigration police officers escort Belarusian model Anastasia Vashukevich, center, from the Immigration Detention Center towards a vehicle to take her to an airport for deportation, in Bangkok, Thailand, Thursday, Jan. 17, 2019. Thai police says it will deport Vashukevich who claimed that she had evidence of Russian involvement in helping elect Donald Trump as U.S. president after she pleaded guilty in a case related to holding a sex training seminar in Thailand. (AP Photo/Sakchai Lalit)

Anastasia Vashukevich, also known on social media as Nastya Rybka, sits in a cage in the court room in Moscow, Russia, Saturday, Jan. 19, 2019. A Belarusian model who claimed last year that she had evidence of Russian interference in the election of Donald Trump as U.S. president was arrested immediately upon her arrival in Moscow on Thursday following deportation from Thailand. (AP Photo/Alexander Zemlianichenko)

Anastasia Vashukevich, also known on social media as Nastya Rybka, center, is escorted in the court room in Moscow, Russia, Saturday, Jan. 19, 2019. A Belarusian model who claimed last year that she had evidence of Russian interference in the election of Donald Trump as U.S. president was arrested immediately upon her arrival in Moscow on Thursday following deportation from Thailand. (AP Photo/Alexander Zemlianichenko)

Navalny drew on Vashukevich’s video from summer 2016 when Deripaska was hosting Prikhodko on his yacht and was caught on tape saying that relations between Russia and the U.S. were bad because of then-Assistant Secretary of State Victoria Nuland.

Deripaska is close to Putin and also had a working relationship with Paul Manafort, Trump’s former campaign manager. Manafort was investigated by special counsel Robert Mueller as part of the probe into the 2016 election and was convicted last year of tax and bank fraud.

Deripaska’s representative at the time dismissed the reports as “scandalous and mendacious assumptions.” He promptly filed and won a lawsuit against Vashukevich for breach of privacy and secured a court ruling to delete the videos of him and Prikhodko.

Vashukevich and her teacher, self-styled sex guru Alexander Kirillov, were in Thailand shortly after Navalny’s investigation came out, conducting a sex training seminar when they were arrested for working without a permit. Vashukevich, Kirillov and several others ended up being charged with soliciting sex and spent 11 months in a Thai jail.

In January, Vashukevich and others were sentenced by the court in Pattaya to three-year prison terms before a new ruling gave them suspended 18-month prison terms and deported them to Russia.

In the early stages of their detention, the sex training group sent a note to the U.S. Embassy via an intermediary seeking help and political asylum. Vashukevich indicated she would turn over the recordings she claimed to have if the U.S. could help secure her release, but later withdrew the offer, suggesting that she and Deripaska had reached an agreement.

Vashukevich and Kirillov initially blamed Russia for their incarceration and said they were fearful for their lives. In April, however, Vashukevich changed her tune and said it was the U.S. government that was persecuting her, not Russia.

Vashukevich later told reporters outside a Thai courtroom that she had promised Deripaska not to speak about the U.S. election interference anymore.

Vashukevich and Kirillov were briefly detained upon their arrival in Moscow late last month on suspicion of soliciting sex in Russia but were promptly released.

When pressed Friday by the AP about her previous claims, Vashukevich said she had emailed “everything I had” to Deripaska and dodged a question of whether she kept a copy for herself.

“Oleg (Deripaska) has it all. If he wants to make any of it public, if he thinks that it’s a good idea, he can do it himself,” she said.

A spokeswoman for Deripaska had no immediate comment Friday on Vashukevich’s new allegations.

The Belarusian native who penned two books about seducing rich, powerful men explained to the AP how she changed her mind about who was to blame for her plight in Thailand.

She said he received multiple visits from Americans with FBI IDs who were seeking information about her claims of Russian interference in the 2016 U.S. election. She said they offered her safety in the U.S. or threatened her with a lengthy prison term if she refused to cooperate.

Around the time when she first publicly supported Russia, Vashukevich received a visit from Vladimir Pronin, Russia’s newly appointed consul in Pattaya, who she said helped to improve prison conditions for her and the other inmates. She credited Pronin for securing her release from the Thai prison and her deportation in January.

Russian publications The Bell and Proyekt last year pointed to another high-profile visitor who Vashukevich caught on tape spending time with Deripaska.

One video posted on her YouTube account showed a meeting between Deripaska and Adam Waldman, a U.S. lobbyist who has been working for Deripaska and who has had repeated meetings with WikiLeaks founder Julian Assange. The reported January 2017 meeting was several days before Waldman’s visit to Assange at the Ecuadorian Embassy in London.

When asked Friday if the reports proving the Russian interference in the U.S. elections included recordings of Waldman, Prikhodko and Deripaska, the Belarusian woman said: “I didn’t tell you that.”

Vashukevich has kept a low profile since her release, a stark contrast to the racy photos that she used to post on Instagram.

On Friday, she would not respond to a question on whether she was currently collaborating with Russian authorities. Her remarks, however, indicated that she may have traded her silence for security.

Asked Friday if she was now the one being manipulated, she swore in English and asked “What do you do?”

Iuliia Subbotovska contributed to this report.

This version corrects the headline to show that Vashukevich is Belarusian, not Russian.

Britain, France, and Germany are ignoring Trump while they look to trade with Iran and honor the 2015 Obama nuclear deal

Harry and Meghan in last public engagement as working royals –...

Samsung improves read/write speeds in its biz-card-sized SSDs with the new...

Paul Pierce inexplicably says LeBron James is not a Top 5...

Hurricanes really are getting stronger, just like climate models predicted –...