United Nations judges at the International Court of Justice (ICJ) must act to stop continuing genocide of the Rohingya minority in Myanmar, Gambia’s justice minister said on Tuesday.

In an opening statement at the tribunal, also known as the World Court, the Gambia’s Minister of Justice Abubacarr Tambadou said: “All that the Gambia asks is that you tell Myanmar to stop these senseless killings.

“To stop these acts of barbarity and brutality that have shocked and continue to shock our collective conscience. To stop this genocide of its own people.”

The case, the first international legal attempt to bring Myanmar to justice over alleged mass killings of the Rohingya minority in 2017, comes after the Gambia on November 11 filed an application at the ICJ, accusing Myanmar of violating the 1948 Genocide Convention.

In a rare move, Aung San Suu Kyi, the country’s civilian leader who was awarded the Nobel Peace Prize for her struggle against Myanmar’s military dictatorship, is defending her country in the UN’s top court.

She is leading the Myanmar delegation in her capacity as foreign minister and is due to address the court on Wednesday, expected to repeat denials of genocide and argue that military operations in question were a legitimate response to attacks by Rohingya “militants”.

After arriving in a motorcade at the ornate Peace Palace in The Hague, Aung San Suu Kyi ignored questions shouted out to her by waiting reporters. Wearing a traditional dress, she sat expressionless in the courtroom as the Gambian team detailed alleged atrocities in Myanmar. 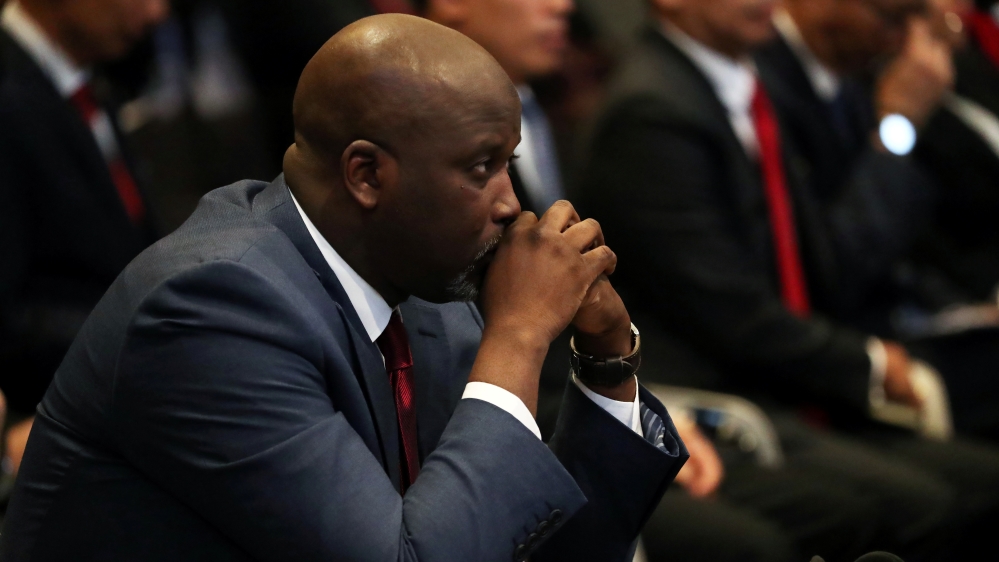 The Gambia is requesting that provisional measures be taken to prevent “extrajudicial killings or physical abuse; rape or other forms of sexual violence; burning of homes or villages; destruction of lands and livestock, deprivation of food and other necessities of life, or any other deliberate infliction of conditions of life calculated to bring about the physical destruction of the Rohingya group in whole or in part.”

Outside the court, dozens of Rohingya demonstrated to demand justice for victims, while in Yangon, the commercial capital of Myanmar, thousands of people rallied in support of Aung San Suu Kyi, waving national flags as they chanted: “To protect the country’s dignity, stand with Mother Suu.”

This week’s proceedings before a panel of 17 judges will not deal with the core allegation of genocide, but the Gambia has requested a court order for Myanmar to halt any activity that may aggravate the dispute.

More than 700,000 Rohingya, a mostly-Muslim minority, fled to neighbouring Bangladesh after a bloody crackdown in 2017 by the Myanmar military, which UN investigators have concluded was carried out with “genocidal intent”.

Reed Brody, a commissioner at the International Commission of Jurists, who was instrumental in the prosecution of former Chadian President Hissene Habre, told Al Jazeera: “It’s totally unprecedented for a top political leader like Aung San Suu Kyi to take a leading role in a legal case at the ICJ.

“Legally it could be counterproductive for [Aung San] Suu Kyi to assume such a role since it looks like she is politicising the case.

“The ICJ oozes tradition and diplomatic protocol and I doubt the judges will be impressed by tour groups arriving from Myanmar to support the government.”

Myanmar has long denied accusations of genocide and most allegations of targeted military-led violence, saying its actions were meant to protect the country against Rohingya “militants”. It has promised to punish soldiers involved in what it says are isolated cases of wrongdoing.

With reporting by Mia Swart.

Erdogan warns of chaos in Libya as he hosts Merkel

6 questions that will reveal whether you’re wise; how wisdom wards...