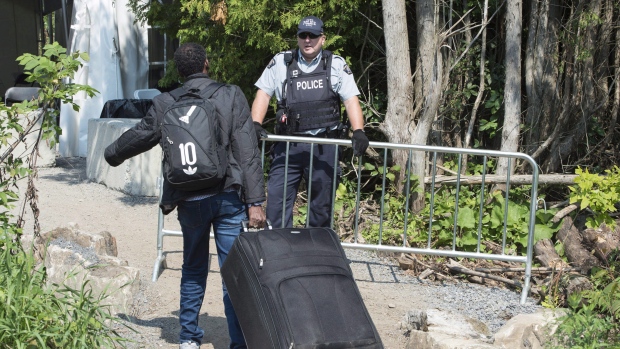 An asylum seeker is confronted by an RCMP officer as he crosses the border into Canada from the United States on August 21, 2017 near Champlain, N.Y. (Paul Chiasson / THE CANADIAN PRESS)


OTTAWA — New figures out this morning from the national statistics office says the number of asylum claims in Canada more than tripled between 2015 and 2018.

Statistics Canada says that in 2015, the year the Trudeau Liberals were elected, there were about 16,000 asylum claimants.

Last year, Statistics Canada says, there were 55,000 claimants, showing the pace of growth had slowed, but the total was well above the previous peak for claimants a decade earlier.

Details from the national statistics agency also show that asylum claimants tend to be younger than the general population in Canada, and most are male.

Economically, asylum-seekers fare similarly to other immigrant groups — the longer they are in the country, the higher their average salaries and wages

Sign up today and start receiving the latest breaking news headlines delivered directly to your inbox.

Sign up for your dose of political news with Capital Dispatch.

Catch up on the biggest headlines with a roundup of ‘5 Things to Know’ to start your morning.

Under strong health measures, 22,000 Canadians could die from COVID-19

Coronavirus: What’s happening in Canada and the world on Thursday | CBC News

There’s nothing sinister in wanting to spare SNC-Lavalin