London, United Kingdom – Following two recent attacks in London carried out by convicts who had been let out of jail early, the government has promised to end early prison release for “terror” offenders.

But emergency legislation, which the government hopes to introduce in days, would mean “terror” offenders would not be considered for early release before serving at least two-thirds of a sentence. They would then be assessed by the Parole Board and if judged to still pose a threat to society, would remain in prison.

On Sunday, 20-year-old Sudesh Amman, who had been serving a three-year sentence for the possession and distribution of terrorist material, carried out a stabbing attack in Streatham, south London while wearing a fake suicide vest.

He had been released from prison a week earlier and was under 24-hour police surveillance.

The attack resulted in police killing Amman after he injured three people.

In November, 28-year-old Usman Khan killed two people in a stabbing attack at London Bridge, also wearing a fake suicide vest and was also shot to death by police. He had been released earlier in the year having served half his sentence over a failed bomb plot.

ISIL claimed responsibility for both attacks.

Chris Allen, associate professor in the Centre for Hate Studies at the University of Leicester

UK Prime Minister Boris Johnson said on Monday, a day after the violence in Streatham: “The idea of automatic early release for people who obviously continue to pose a threat to the public has come to the end of its useful life.”

Those already jailed could see their sentences changed retrospectively to deny them early release, Johnson said, a move that would likely be challenged by legal experts.

On the same day, Justice Secretary Robert Buckland told parliament: “Automatic half-way release is simply not right in all cases.”

He promised longer and tougher sentences for “serious terrorist offenders” while keeping the “worst” locked up for a mandatory minimum 14-year term. Prisons would be overhauled under the plan and probation would involve tougher monitoring including lie detector tests.

The government would also double the number of counter-terrorism probation officers.

But rights groups and experts have condemned the plan as an ineffective solution that does little to protect the public and risks harming civil liberties.

Clare Collier, Liberty advocacy director, said: “The government’s response to recent terror attacks is a cause of increasing concern for our civil liberties. From last month’s knee-jerk lie detector proposal, the threat to change people’s sentences retrospectively which risks breaking the law, continuing to introduce measures without review or evidence is dangerous and will create more problems than it solves.

“It’s clear the UK’s counter-terror system is in chaos and desperately needs proper scrutiny and review.”

There are currently about 200 “terror” convicts in UK prisons who could be affected by the changes.

Other critics said extending prison time would have a limited effect on “deradicalising” convicts and public safety.

Benjamin Ward, UK director at Human Rights Watch, told Al Jazeera: “Whether someone serves the full duration of their sentence or a portion, at some point they will be released. The key to this is about deradicalisation, looking at what’s happening in prisons.”

PM Johnson himself acknowledged the UK’s deradicalisation system had problems, telling reporters on Monday the “instances of success are very few”, while specifically referring to “people who succumb to Islamism”.

Experts warned the new rules could create a two-tiered, discriminatory prison system in which Muslims are treated differently.

“Ceasing automatic release for one group of offenders in light of a small number of cases where such offenders have gone on to reoffend creates an unfair and biased system for both offenders and victims,” Mandeep Dhami, professor at Middlesex University London, who has worked in two British prisons and studied mediation in prison settings, told Al Jazeera.

Describing the UK government’s response to tackling “extremism” as “woefully inadequate”, she added: “There are other groups of offenders who also reoffend after automatic release and their victims should ask why the government does not wish to protect them from violent crime.

“Similarly, creating a system that appears to favour some offenders will only serve to further alienate those people who feel disenfranchised and who may be drawn to extremist ideologies that point to systemic social biases.” 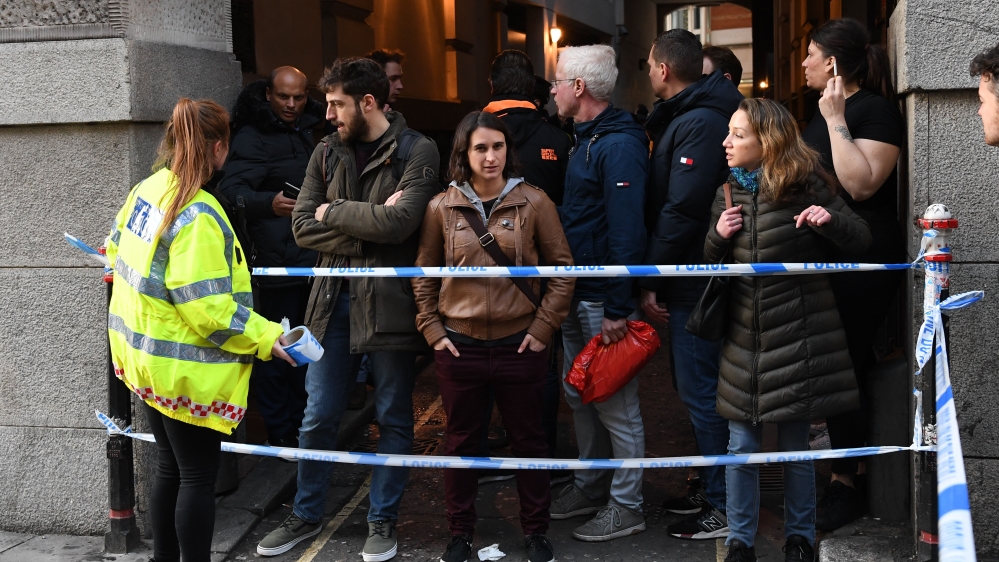 A police close to the scene of an incident at London Bridge on November 29, 2019, after Usman Khan killed victims Jack Merritt and Saskia Jones in a stabbing attack [Facundo Arrizabalaga/EPA-EFE]

As well as Johnson, Michael Gove, a senior cabinet minister, said in an interview with Sky News on Tuesday: “There is a big difference between those people who are Islamist extremist terrorists and those convicted of other offences.”

Regarding the attempt to apply new rules retrospectively, Chris Allen, associate professor in the Centre for Hate Studies at the University of Leicester, told Al Jazeera: “Undermining the rule of law has the very real potential to feed into extremist narratives that suggest that Britain – and ‘the West’ more broadly – is against Muslims and the religion of Islam.

“While the introduction of emergency measures that seek to retrospectively rewrite the terms and conditions of existing convictions is worrying, even more so is the potential for the construction of a two-tier criminal justice system where terror-related convictions become demarcated and disproportionately dealt with in comparison to other similar crimes.”

Meanwhile, there is a growing far-right threat in the UK.

In September last year, Neil Basu, the UK head of counter-terrorism, said far-right “terrorism” was the fastest-growing problem, as he reported several foiled plots – some of which were designed to kill people.

“While the growing threat of the extreme right wing has, in recent years at least, helped push back on some of those criticisms, stating – and more importantly, acting on the basis that Islamist extremists or terrorists are now worse than other extremists … will hand a victory to the extremists who seek to divide us.”

Ubisoft Is Giving Away Free Games to Encourage People to Stay...

SCOTUS Rejects Arguments Kavanaugh Made As An Appeals Court Judge –...

India-Pakistan tensions: Who won the war of perceptions?