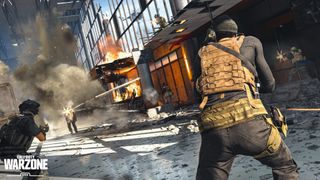 Call of Duty Warzone has racked up 15 million players.

Only two days ago we shared that the surprise battle royale was already reporting six million players in the first 24 hours of its launch. Now – just 48 hours later – Activision has more than doubled that number.

By comparison, Apex Legends – EA’s free-to-play battle royale game set within the Titanfall universe – attracted one million unique players in the first eight hours, and took 72 hours to hit 10 million players. A little over a month later, it had 50 million players.

There’s still some way to go before Warzone can be considered a real threat to Fortnite’s dominance, though – Epic’s fan-favourite battle royale has now surpassed 250 million players.

As Jordan explained earlier this week, Warzone is a new free-to-play battle royale Call of Duty game that pits 150 players against each other across two modes: Plunder and Battle Royale. Plunder tasks you with collecting the most money through loot, stealing money, and completing in-game Contracts. Battle Royale is rather self-explanatory, with some welcome innovations like battles between eliminated players that let the winner respawn back into the game.

You can access Call of Duty: Warzone on PC, PlayStation 4, and Xbox One as an add-on to Call of Duty: Modern Warfare, or as a separate client. If you have Modern Warfare and its most recent update downloaded, the download will cost your PC or console between 18 and 22GB of hard drive space. As a standalone title, expect Warzone to take up about 80GB of space.

Here’s a quick guide on Call of Duty: Warzone crossplay and how to play with your friends on different platforms.

Part of GR+’s news crew, Vikki is a (jumpy) survival horror survivalist with a penchant for sci-fi, shooters, thrillers, and a strong cup of Yorkshire tea. A committed Guardian and Spartan, she’s terrible at FPSs, but loves ’em all the same.

OnePlus and McLaren have ended their phone partnership – Engadget

‘Young miracle:’ Baby recovers from Ebola in Congo outbreak – The...

Strictly’s Oti Mabuse ‘feuding’ with Cheryl after ‘not gelling on The...

Facebook moderators tell of strict scrutiny and PTSD symptoms – The...